Directed by John Huston
One of the best realized religious drama in many a moon.

"The fiction writer," Flannery O'Conner once noted, "presents mystery through manners, grace through nature, but when he finishes there always has to be left over that sense of Mystery which cannot be accounted for by an human formula." John Huston has intuited this truth from his screen adaptation of O'Connor's first novel Wise Blood. The seemingly grotesque characters who populate the story are very human in their religious hungers and their poignant cravings for love and recognition.

In reaction to the stern fundamentalism of his grandfather and the rigid Puritanism of his mother, Hazel Motes, an army veteran, decides to establish a Church Without Christ. Using his rattletrap car as a pulpit, he announces: "I'm member and preacher to the Church were the blind don't see and the lame don't walk and what's dead stays that way."

While evangelizing, he encounters a handful of other misfits: Enoch Emery, a country rube in search of a friend in the cold-hearted city; Hoover Shoates, a huckster who sells religion for a money-making venture; and Asa Hawks, a bogus street preacher who makes the rounds with his daughter Sabbath Lilly.

Hazel's passionate commitment to his own truth goes awry when he murders a man Shoates has hired to impersonate him. "Two things I can't stand," he says to the victim, "a man that ain't true and one that mocks what is." A policemen shoves Hazel's car into a pond, destroying his sanctuary in one splash. Displaced again, the founder of the Church Without Christ blinds himself and undergoes a self-inflicted penance of torture. Although his landlady wants to marry him, Hazel refuses and on a rainy afternoon heads out to meet his Master in an lonely and fortuitous death.

Brad Dourif (who was Billy Bibbit in One Flew Over the Cuckoo's Nest) plays Hazel Motes with a fierce intensity which conveys the story's zigzag message of sin and salvation. Daniel Shor is impressive as Enoch Emery whose quest for affirmation is most vivid when he gives Hazel a shrunken mummy as "the new Christ" and when he dons a gorilla outfit before shaking hands with the baffled townsfolk. Amy Wright as Sabbath Lilly and Mary Nell Santacroce as Hazel's landlady each manage to make the ache of loneliness especially tragic.

The cumulative effect of Huston's sensitive direction, the literate screenplay, the jaunty music by Alex North, and the many strong performances is enough to convince me that Wise Blood is one of the best realized religious movies of the decade! The course of God's grace is tricky and no where is that more evident than in Flannery O'Connor's saga of Hazel Motes.

Special features on the DVD include interviews with actor Brad Dourif, writer Benedict Fitzgerald, and writer-producer Michael Fitzgerald; a rare archival audio recording of author Flannery O'Connor reading her short story "A Good Man is Hard to Find"; a 26-minute episode of the television program "Creativity" with Bill Moyers from 1982, featuring director John Huston discussing his life and work; and a booklet featuring an essay by author Francine Prose. 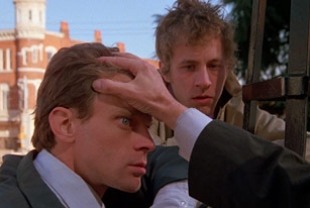