Directed by Wolfgang Becker
An intimate drama about nurturing love as well as a witty political parable.

In 1978 in East Berlin, eleven-year old Alex Kerner and his sister Ariane watch a television broadcast of the Soviet spacecraft with the first German cosmonaut aboard. In the background, their mother, Christiane (Karin Sass), is being interrogated by police about the disappearance of her husband whom they suspect has fled to West Berlin. After languishing in a long and severe depression, she decides to become a very active supporter of the German Democratic Republic.

On the fortieth anniversary of her homeland, Christiane witnesses her now grown son Alex (Daniel Bruhl) being arrested in a demonstration. She has a heart attack and falls into a coma. During the next eight months, her world is turned upside down with the fall of the Berlin Wall, the resignation of Honecker, the invasion of Western products and companies, and talk about the reunification of Germany. When she miraculously comes out of her coma, doctors advise Alex and his sister (Maria Simon) that their mother's health is still fragile and she cannot handle any shocks to her system.

But a lot has changed! Alex's old job in a TV repair shop has been replaced with a new one selling satellite dishes with Denis (Florian Lukas). Ariane has abandoned school and works at Burger King. She has a new boyfriend and a baby as well. To protect his mother, Alex comes up with the idea of restoring everything in Christiane's world just as it was before she suffered the heart attack.

This modern-day twist on the Rip Van Winkle tale is directed by Wolgang Becker based on a screenplay by Bernd Lichenberg. Goodbye, Lenin! was a box-office smash in Germany and that's not hard to understand given the creative premise of the drama and its special blend of political and familial truths. The film's emotional core is Alex's deep love for his mother and the sturdiness of his nurturing instinct over time. He creates for the bedridden Christiane a socialist oasis with clothes, furniture, and foods from the period (including her favorite brand of pickles and coffee). Old friends are rounded up for a birthday celebration, and young boys dressed as Young Pioneers are paid to sing to her. When she insists upon watching television, Alex gets Denis, an amateur filmmaker, to help him create German Democratic Republic news reports to supplement tapes of old shows.

The elaborateness of the charade shifts into high gear when Christiane gets up and walks out into the street to behold a very strange new world. Now a news segment reports that West Berliners have swarmed into the GDR as refugees; another one states that Coca-Cola was not invented in the West as previously assumed but always was an East German creation. Throughout all of this, the filmmakers manage to make the communists into vulnerable and endearing people who are struggling with change.

A final thematic strand compares the reunification of Germany to the reunion of a divided family. One day Ariane reports having seen her father and two children at Burger King. Later, on a visit to the countryside, Christiane reveals to her astonished children what really happened to their father (Burghart Klaussner). Goodbye, Lenin! works very well as an intimate drama about a young man's nurturing love for his mother and as a richly developed and witty political parable about the the fall of the German Democratic Republic and the rise of Western consumerism. 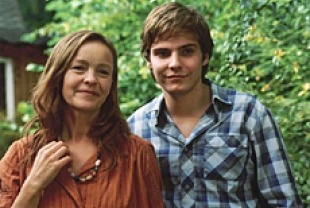