The Story of the Weeping Camel

Directed by Byambasuren Davaa, Luigi Falorni
A wonderful Mongolian film about the deep and powerful bonds that link human beings and animals together in a common need for nurturing.

It is springtime in the Gobi Desert of South Mongolia where four generations of nomadic shepherds live together in separate tents. One of the elders of the clan tells the story of why their camels weep. These animals were once given antlers by God. But one camel loaned his set to a deer for a celebration, and they were never brought back. As a result, camels are always looking off into the distance, yearning for the return of their antlers.

Everyone in this extended family is on alert during the camels’ birthing season. The first mother to deliver is decorated with a special harness. Another mother has a difficult labor and members of the clan must assist her by pulling the colt out of her womb. The rare white calf soon staggers to his feet but his mother rejects him. This causes great sorrow among the shepherds, who begin feeding him by hand. At one point, they tie the mother camel's legs together so the baby can suckle, but once free she wanders away, her very unhappy baby following at a distance behind her.

This wonderful Mongolian film directed by Luigi Falorni and Byambasuren Davaa gives us a glimpse of life in this rugged countryside as the nomadic clan tends to their animals and deals with the elements. There are plenty of relaxed scenes of family life — meals shared, games played, and the various responsibilities of caring for the animals. The young mother is quite involved in the attempts to feed the camel colt. It is obvious that she understands on a deep level how important nurturing is for the young. Eventually, her two young sons are sent across the desert to the regional tribal center to summon a musician needed for a ritual to bring the two camels together. This scene, when he plays the violin while the young mother sings to the camel, is absolutely mesmerizing, a tribute to the ancient healing ways that tribal peoples have used for centuries.

But change is on its way, creeping across the landscape with all the menace that the two boys experienced from a storm on their journey. In town, the youngest boy had a chance to watch television and back home, he announces that he much prefers the entertainment on the little screen to the stories of his grandfather.

The Story of the Weeping Camel is a total delight from start to finish, and it speaks volumes about the ties that bind human beings and animals together. It is a tribute to the spiritual power of nurturing as an essential ingredient in keeping life bountiful and opening the hearts of all species. 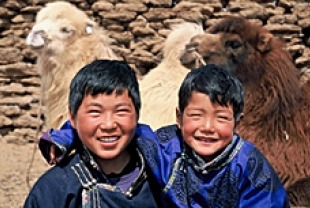