The Middle of the World

Directed by Vicente Amorim
An unusual road movie that celebrates the virtues of family solidarity and the enjoyment of simple pleasures.

Romao (Wagner Moura), an illiterate and unemployed truck driver in Brazil, dreams of getting a job with a monthly salary of 1,000 reais — just enough to take care of his wife Rose (Claudia Abreu) and their five children. Unwilling to leave them behind, find work, and then send for them; he comes up with the idea of their riding to Rio de Janeiro on bicycles. Romao is convinced that Father Cicero, his patron saint, will look after them on the road. It is an arduous journey which is filled with danger and disappointments.

In the opening scene, the family's infant crawls off and sits down in the middle of the highway. The driver of a large truck sees the baby just in time and swerves to miss him. Although Rose and a son who plays a guitar are able to earn some money for food by singing in restaurants and other public places, there are times when they all sleep in abandoned buildings without any food or water in their stomachs.

Romao has troubles with Antonio (Ravi Ramos Lacerda), his oldest son, who seems aimless. Yet he does have his heroic moments, such as when he defends his mother against some property owners who try to kick them out of an empty building. For his trouble, Antonio’s nostril is slit. The boy carefully watches over his sleepwalking younger brother who has no recollection of his nighttime excursions.

Work is not easy to find anywhere in Brazil but in one town, Rose makes some hammocks and proves to be very skilled at it. But they don't stay there long. Romao is buoyed when they reach a place where thousands of pilgrims have come to honor Father Cicero. In act of reverence, he lifts a table of the saint and his confidence in the future is restored. Meanwhile, Antonio faces new challenges when he starts looking at alluring girls and wonders if it isn't time for him to head out on his own apart from his family.

In his feature film debut, director Vicente Amorim has make an engaging and well-done road movie. The screenplay by David Franca Mendes is based on a true story. It isn't very often that poor and illiterate people are the lead players in a contemporary drama. Wagner Moura is convincing as the diligent and determined Romao who believes in his destiny. In one crucial scene, he tears up some bus tickets Antonio has purchased with money stolen from the offering box in a shrine to Mary. No matter what their situation, they cling to their ideals and respect the difference between right and wrong. Still, unemployment makes Romao feel bad about himself; he is humiliated when Rose earns money making the hammocks. When he is forced to take an embarrassing job in a skit put on for tourists, his anger boils over.

Claudia Abreu gives a tour de force performance as Rose, a patient woman who agonizes over her children’s hunger and safety. Her patience for Romao's single-mindedness wears thin but her love for him is unflagging. These two poor people do not allow their dire circumstances to take away their dignity or diminish their small pleasures in song and familial camaraderie. 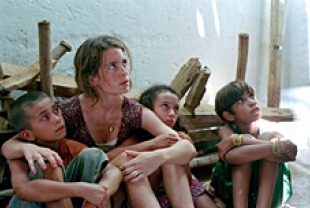