Directed by Gonzalo Justiniano
A rigorous Chilean film about the challenges faced by a teenage girl forced to take charge of her own life at an early age.

Too many children in the world live in poverty and are forced to contend with adult problems. Many of these boys and girls lack the resiliency to handle constant setbacks and adversity. They crumble, turn to drugs, or plummet into depression. Others seem, almost miraculously, to have the inner resources to survive no matter what challenges and disappointments come their way. In this rigorous Chilean film directed by Gonzalo Justiniano, a 14-year-old girl is put through the wringer with one bad thing after another knocking her down.

Kathy (Manuela Martelli) lives with her mother (Lorene Prieto) and her older brother Danilo (Felipe Rios) in a ramshackle house in the countryside. They don't have much money. Kathy's mother works in a shop where the owner extracts sexual favors from her. One day she takes her daughter to meet her father (Eduardo Barril) who is in prison. Kathy is not impressed with him at first. The only bright spot in her life is Chemo (Ricardo Fernandez), a new boy at school who likes her so much that he gives her a copy of The Little Prince. When Kathy's father is released from prison, he immediately returns to his old ways and while on a trip to the city with his daughter, robs a gas station and steals a car all while she is waiting patiently for him on a corner. Later, the police arrive looking for him and break up her fifteenth birthday party.

The downward spiral of events in Kathy's life leads her deeper and deeper into helplessness. Yet she has a mantra which she repeats over and over to herself: "I'm not afraid of anything . . . dogs, gypsies, night, wind or earthquakes." After Kathy's father flees and her mother dies, Kathy decides that it is time to take charge of her own life. She seduces Chemo. and then has sex with him. Afterwards, she is pleased with her decision and confident that she will be able to handle life on her own. Once her brother leaves for work in another town, Kathy leaves as well. On the road, she faces even more difficulties and is forced to repeat her mantra more frequently.

Mauela Martelli puts in a stellar performance as this resilient teen-ager who is forced by circumstances beyond her control to make her own way in the world. 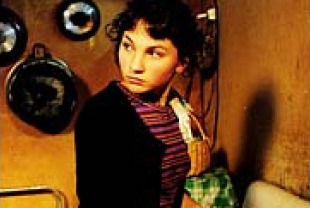