Directed by Alejandro Agresti Agresti
A tender and heart-warming Argentinian film about an imaginative boy who wants to have a real family.

Valentin (Rodrigo Noya) is an eight-year-old boy living in Argentina in 1969 with his grandmother (Carmen Maura), an unhappy woman who has negative things to say about everyone and everything. The only joyous moments between them are when she talks about her romance with her late husband, who died of diabetes. Valentin understands in his heart that she is not mean, just lonely. He is also trying to make the best of a bad situation with his father (Alejandro Agresti), a selfish man who lives on his own and has become a womanizer. They don't get together very often. Valentin’s mother, a Jew, has mysteriously disappeared.

The boy fills his spare time with fantasies of becoming an astronaut. Although adults tell him that he has to live in America or Russia to take up this career, he stubbornly persists in holding his breath and doing practice walks on the moon in his homemade space outfit. Desperate for male companionship, he befriends Rufo (Mex Urtizberea), a neighbor who is a pianist.

Valentin really wants to have a normal family life, and he is delighted when his father sets up a meeting with Leticia (Julieta Cardinali), his latest pretty girlfriend, and he spends a dreamlike afternoon with her. The boy shares his regret that his father will not let him see his mother. He opens his heart to her and even expresses his yearning that she would marry his dad so they could all have live happily ever after. The fallout from his honesty is not what Valentin expects.

Written and directed by Alejandro Agresti, this remarkable drama takes us right into the yearning heart of a very smart and lonely young boy. Like many other resilient children who are forced to adapt to difficult circumstances, he relies upon his imagination, whether he is building rocket ships in his room or playing matchmaker for his father. Still he is very isolated. He identifies with a Catholic priest who pays tribute to Che Guevara in a sermon and then watches sadly as many members of the congregation walk out in protest. The boy doesn't understanding his father’s prejudice against Jews, but there is very little he can do about that. What he can do is help his ailing grandmother who refuses to see a doctor. This boy's heart is in the right place.

The hopeful finale gives Valentin an opportunity to play matchmaker, something he finds much to his liking. This tender and heart-warming Argentinian film is a winner!

Along with scene selections and the theatrical trailer, the DVD has a 12-minute interview with director Alejandro Agresti in which he reveals that the story is in many ways autobiographical, which actually helped him work with the young actor Rodrigo Noya. He also discusses why he set the story in 1969 and his reasons for making films. 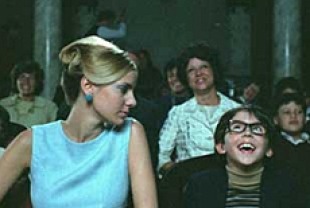