Directed by Morgan Spurlock
The revolutionary documentary that examines the link between the junk food industry and the obesity epidemic in America.

America is the fattest country in the world with 100 million overweight people and 400,000 individuals dying each year from obesity related ailments. Now even children are eating too much and exercising too little. Eric Schlosser first brought our attention to this matter with his bestselling muckracker Fast Food Nation. He identified McDonald's as the chief villain with its cradle-to-grave marketing strategy that starts off manipulating children through playgrounds, toys, and the Ronald McDonald clown. The nightmare of brainwashed toddlers eating junk food and drinking sodas on a regular basis is enough to make anyone sick.

The fast food mania in America just made Morgan Spurlock mad, and so he decided to make a documentary using himself as a guinea pig. He ate three meals a day only at McDonald's for 30 days in 20 cities. He hired a team of doctors to monitor the impact of this experiment on his body. The result is catastrophic: he gains over 25 pounds eating 5,000 calories a day and trashed his liver to the point of seriously jeopardizing his future health and well-being. Other side-effects of the junk food binge include chest pains, depression, headaches, sugar/caffeine crashes, and heart palpitations. His vegan chef girlfriend is appalled at the deterioration of his health.

Spurlock presents interviews with the U.S Surgeon General; a professor of law at George Washington University involved in a law suit brought against McDonald's by two overweight women; John Robbins, author of Diet for a New America; Don Gorske, a Big Mac enthusiast who eats 700 of them a year; and Bruce Howlett who undergoes gastric-bypass surgery. Spurlock also looks at the connections between the junk food industry and high school lunch programs, food addictions, and the low priority given to physical education programs at a time when so many children are overweight. Although not as expansive or as hard-hitting as Schlosser's book, this feisty documentary makes its points very effectively. It could serve as aversion therapy for many who have chosen to make junk food their choice when they eat out.

Morgan Spulock and his girlfriend, a vegan chef, provide the audio commentary on the DVD. There is also an interesting interview with Eric Schlosser, author of Fast Food Nation: The Dark Side of the All-American Meal. 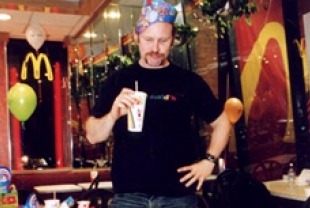