Directed by Andrew Adamson, Conrad Vernon, Kelly Asbury
The compleat family comedy with delightful new characters and its own wacky exploration of what it means to live happily ever after.

At the end of the wild and wonderful film Shrek, we were left wondering whether the green ogre Shrek (voiced by Mike Meyers) and his new bride Princess Fiona (Cameron Diaz) would live happily ever after. It's good to be back in their company again. The opening scenes of this sequel show them frolicking on their honeymoon, but when they get back home to the swamp, they discover that Donkey (Eddie Murphy) hasn't quite gotten the message that his buddy is now married and that things have changed.

Shrek is upset when an invitation from Fiona's royal parents arrives, inviting them to a fancy ball in their honor. He knows that they won't be happy when they see that they both are ogres. But Fiona dreams of a loving reunion with her parents and convinces Shrek and Donkey to accompany her to the kingdom which is called Far Far Away.

King Herald (John Cleese) and Queen Lillian (Julie Andrews) and the rest of the kingdom are stunned into an awkward silence followed by gasps of disbelief when Fiona and Shrek step from the royal coach into the light of day. The ogre and the king get into a primal tiff at the dinner table, and the reunion is complete disaster. Adding complication to the situation is the presence of Fiona's Fairy Godmother (Jennifer Saunders) who has persuaded the king to join her in a plan to get rid of Shrek and have Fiona marry her handsome son Prince Charming (Rupert Everett). However, an assassin hired to kill the orgre fails in the task and instead becomes his friend. This scene-stealing character is Puss In Boots (Antonio Banderas). He hardly seems menacing when he's coughing up a fur ball or looking lovingly into Shrek's eyes with an accompanying sound of purring adoration!

Directors Andrew Adamson, Kelly Asbury, and Conrad Vernon keep the story humming along nicely without losing the central point that Shrek and Fiona's happiness has nothing to do with external beauty and everything to do with their basic love for each other and their delight in being in their own skin. The screenplay by Andrew Adamson, Joe Stillman, J. David Stem and David N. Weiss couldn't be more topical given the country's obsession with cosmetic surgery makeovers and other extreme transformations of bodies and homes. The movie delivers delightful spoofs of the dominance of franchises in our lives; the fairy tale characters who inhabit our consciousness including Pinocchio, the Three Little Pigs, and Sleeping Beauty; and scenes from other popular flicks.

None of this verve detracts from our abiding affection for Shrek whose good heart brings tears to the eyes of Puss In Boots — and probably most of the audience. The upbeat musical numbers that end the film will leave you with the distinct impression that Shrek and Fiona will definitely live happily ever after on their own admirable terms. 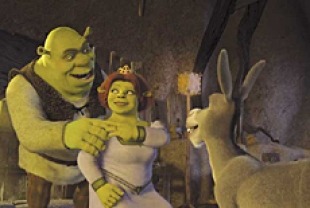 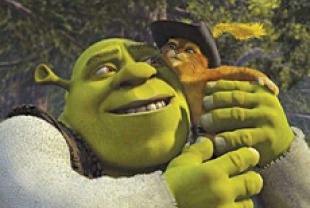 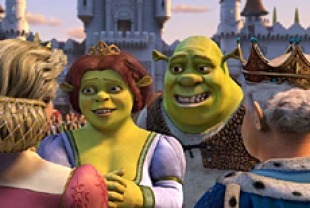 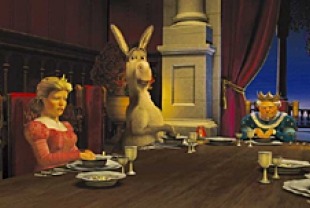