Frankie and Johnny Are Married

Directed by Michael Pressman
Proves that playing together can bring zest to any sagging long-term love relationship.

This intimate and witty drama is about a husband and wife who decide to revive their strained relationship by mounting an Equity Waiver production of a well-known romantic drama. The writer and director of this inventive film is Michael Pressman whose extensive credits in film and television writing include directing the feature film To Gillian on Her 37th BirthdayPicket Fences, and directing the popular TV series Chicago Hope. He calls this a cinematic memoir, and it brings together three thematic strands that interest him: the challenges of refreshing a marriage by taking a risk together, the tricky need for people to really listen to each other in both private and work situations, and the complications that arise in any creative effort when a group of people are trying to present a work of art to the public.

In the opening scenes of the film, Pressman is on the set of Chicago Hope and is called to the Mandy Patinkin's dressing room to calm the actor down. On the way home, he forgets his promise to pick up some medicine for his sick child. His wife, Lisa Chess, a talented actress who has not been able to land a good role for years, vents her frustration with his carelessness and his habit of always putting work before family obligations. Partly out of guilt and partly out a genuine desire to bring his wife some happiness and fulfillment, he comes up with the idea that they take the money they have just gotten from a tax refund and put on a play which he will direct and she will star in. They choose is Terrence McNally's Frankie and Johnny in the Clair de Lune. Stephen Tobolowsky says that Pressman is courting trouble by taking on this project but he plunges enthusiastically ahead. Lisa chooses an old acting buddy, Alan Rosenberg, to play the part of Frankie. Everything seems to be going well until this actor shows himself to be an emotionally unstable man with deep-seated anger toward women and authority figures.

As problems mount in the production, Lisa worries about all the money they are spending. Pressman has an unpleasant encounter with CBS network president Les Moonves who is dumbfounded on how he can possibly turn down a network pilot to do a piddling play with his wife. The final twist in this cinematic memoir is too sweet to reveal but it does show how serious Pressman is about doing something meaningful with Lisa that will deepen and enrich their relationship.

Also appearing in the film are David Kelly, the very successful writer-producer and series creator (Chicago Hope, Ally McBeal, The Practice). In one clever scene, Pressman asks his boss how he handles the many challenges of a life where husband and wife are on different tracks, and Kelly refuses to answer. Frankie and Johnny Are Married proves that playing together in creative ways can put zest into any sagging love relationship. 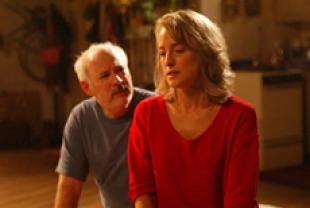