The Name of the Rose

Directed by Jean-Jacques Annaud
A spiritual thriller that holds up thanks to its rich themes and great acting.

It is the fourteenth century, a time when the Christian Church is facing challenges to its authority from within and without. Two Franciscan monks, Brother William of Baskerville (Sean Connery) and his young novice Adso (Christian Slater), arrive at a mountaintop Benedictine monastery to attend a theological debate on whether the Church should celebrate poverty or amass great wealth in the service of God.

To the visitors, it is immediately apparent that something is amiss at the abbey; there is a fresh grave in the cemetery. The major project of the monks is the copying and the illustrating of ancient books and manuscripts. The body of one of the most talented illustrators was recently found at the foot of a cliff. The Abbot (Michael Lonsdale) wants Brother William to investigate. Was it a fall, a suicide or a murder? Then the corpse of another member of the order is found in a vat of pigs' blood. The deaths seem to be linked to the prophecy of the Apocalypse. Soon the monks are convinced that the AntiChrist is afoot in the abbey.

Brother William, whose high regard for human reason has gotten him into trouble with the Church authorities before, believes that the deaths are murders and have something to do with the secret books stored in the abbey's large library. But before he can follow through on his hunches, Bernardo Gui (F. Murray Abraham) arrives. He is the Grand Inquisitor designated by the Pope to hunt down and rid the Church of heretics. He concludes that an herbalist (Elya Baskin), a hunchback (Ron Perlman), and a peasant girl (Valentina Vargas) are the servants of the devil responsible for the crimes. Even as these three are readied for execution, Brother William and Adso search the maze-like library for the key that will solve the murders.

Jean-Jacques Annaud's screen adaptation of Umberto Ecco's bestselling novel The Name of the Rose is a sturdy and engrossing work of art. With the same eye for detail that was evident in Quest for Fire, this French director transports us back to the menacing primitive world ruled by primal emotions. He has drawn out a subtle and strong performance from Sean Connery, a nonconformist monk, and a sensitive one from Christian Slater as the young novice who is initiated into the mysteries and paradoxes of sex, obedience, reason, authority, violence and evil.

Although The Name of the Rose is primarily a gripping murder mystery tale, it can also be appreciated as a film that is thematically relevant to our times. Consider the perennial clash between the authority of Rome and the free-thinking individuality of believers. Think about the connections between the apocalyptic fervors of the Middle Ages and the revival of American millenarianism. And when you look into the sour face of the librarian at the monastery, don't forget that a populist censorial spirit is afoot in the 1980s which would ban books by Mark Twain, J. D. Salinger, and Kurt Vonnegut, Jr. Theologian Harvey Cox has written: "Laughter is hope's last weapon, in the presence of disaster and death, we laugh instead of crossing ourselves, Or perhaps, better stated, our laughter is our way of crossing ourselves." For us, as for the monks of the abbey, laughter may be hope's last weapon. 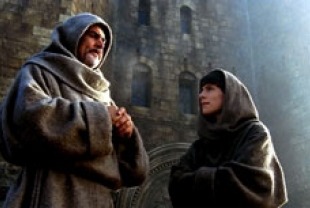