Directed by Zach Braff
A spunky romantic comedy about an enthusiastic young woman who transforms her lover with the good medicine of her presence.

Andrew Largeman (Zach Braff) is a TV actor who lives in Los Angeles and is having a hard time keeping his life on track. For example, he's constantly late for his job as a waiter in a Vietnamese restaurant. One reason for this forgetfulness is that he's been heavily sedated for years. After a traumatic family incident, his father Gideon (Sir Ian Holm) put him on lithium. Now Large (that's his nickname) returns to the Garden State for the funeral of his mother, a paraplegic.

One of the first people he hooks up with is his old buddy Mark (Peter Sarsgaard), a stoner who works as a gravedigger and is in no rush to become a respectable member of society. This peeves his pothead mother, Carol (Jean Smart), who is dating a classmate of his who works as a knight at a local medieval-themed restaurant. The level of Mark's ambition can be seen in his high hopes for cashing in on his collection of Desert Storm trading cards. Large gets together with some other high school friends including Albert (Denis O'Hare,) who has become a millionaire after inventing silent Velcro.

As you have probably intuited by now, this is a very funny and touching romantic comedy populated by some colorful characters. Writer and director Zach Braff manages to consistently surprise us with visual treats and snippets of clever dialogue. Back home in suburban New Jersey after nine years on the West Coast, Large stops in to see Dr. Cohen (Ron Leibman), a sensitive neurologist who gives him some good advice on how to handle the flash headaches that have been upsetting him lately. In the waiting room, the actor meets Sam (Natalie Portman), a young woman whose quirks are vividly on display along with her joie de vivre. She connects with him immediately and soon they are soulful friends.

Sam shows Large her bedroom and, realizing that he is quite an uptight person, she shares a trick she uses to liberate her feelings that involves making funny noises: "This is your chance to do something that has never, ever been done before and will never be copied throughout human existence. If nothing else, you'll be remembered as the only person who ever did this." Large squeaks but very softly. It is only when they are in the backyard burying her dead hamster that Large confesses he is home for the funeral of his mother. Over the next three days, he avoids his father and spends a lot of time with Sam whose enthusiasm draws him slowly out of the shell he has been hiding inside for years. On the last day they are led by Mark on a mysterious journey out to a desolate spot in New Jersey where a strange man and his wife are exploring an abyss. It is appropriate that this is his last adventure before returning to Los Angeles because in the pouring rain, he has an epiphany that turns his life around.

Garden State is the kind of love story that opens us to the mysteries of life and the fact that we cannot control anything. It is better to surrender to the big, brawling, and noisy messiness of lovers who reach out in the darkness to us and friends who go out of their way to sget us gifts that speak to our hearts. Natalie Portman is perfect as the perky Sam whose energy, enthusiasm, and wonder are just the right medicine to bring about Large's spiritual transformation. It is a pleasure to watch him slowly awaken and come alive to his feelings.

Special features on the DVD include an audio commentary by writer/director/actor Zach Braff, actor Natalie Portman, and the filmmakers; outtakes and bloopers; 16 deleted scenes; and a "Making-of" featurette. 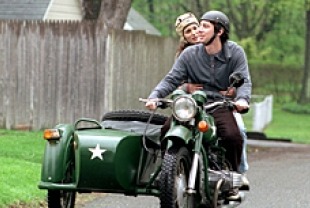 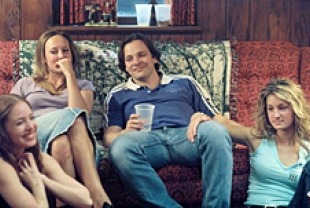