Jack Linden (Mark Ruffalo) and Hank Evans (Peter Krause) work at the same New England college; one is a professor of literature, and the other teaches creative writing. They are good friends, go jogging together regularly, and unwind with dialogue over beer. But there is much they do not talk about.

Hank, who has a small daughter, has cheated regularly on his wife Edith (Naomi Watts), who has a hard time dealing with his view that he must be free to love outside the bonds of marriage. She is secretly having an affair with Jack, built around the times he must leave the house for errands. There is a sexual edge to their relationship but where it goes beyond that, they are both at a loss to say. Edith is convinced that Hank loves writing more than her and his mistresses. She doubts he will change and give her what she really wants: a committed marriage based on love and trust.

Jack's wife Terry (Laura Dern) loves him very much but feels isolated and abandoned in their marriage. She drinks too much, and the household chores and taking care of their two young children exhaust and overwhelm her. Whereas Edith's home is the epitome of organized neatness, hers is a pigpen. Terry's sloppiness and her continual inability to keep on the top of household management peeves Jack.

When Terry tells her husband that Hank made a pass at her, he seizes on the moment and wants to hear about it in detail. He wants to push her until they break up, but she just won't give up on him. In a huge fight, they scrape the bottom and come up with the anger and resentments that have been building over the years — and Jack is forced to take a hard look at what really matters to him.

John Curran directs this intimate drama based on the short stories "We Don't Live Here Anymore" and "Adultery" by Andre Dubus. Screenplay writer Larry Gross has drawn out the emotional firepower of marital conflict, which was also central to another movie based on this novelist's work, In the Bedroom. This well-directed film vividly conveys the ways in which the bonds of a marriage are frayed by little details, dents, and diversions: The way Hank casually flirts with an attractive student standing in the hall outside his office. The way Edith's guilt over her affair is heightened by her daughter's statement that she would not like to travel in outer space unless both of her parents went with her. The way Jack picks away at Terry's character flaws without even realizing the severity of his judgments. The way Terry turns the knife when she sees the bizarre curiosity her husband evidences over the sex she has with Hank. These splits and fissures in marriage can rip apart all the small ties that have accumulated over the years.

Psychologist John Welwood has written: "On the outer level, marriage is a conventional arrangement for regulating social and sexual relations. Yet on an inner level, marriage can be seen as an alliance of two souls helping one another evolve, and as a catalyst for the integration of the masculine and feminine within each of them." Sadly enough, neither couple here aim for this noble ideal of marriage. But two of these flawed individuals do try to repair their relationship. By doing so, they open themselves up to the possibility of helping each other evolve as integrated human beings. 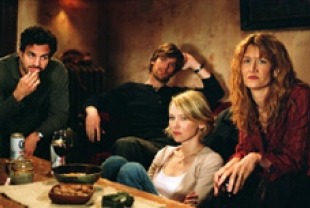