Directed by Deborah Kampmeier
Charts the spiritual transformation of a rebellious teenage girl as she opens to her divine center, nurturing abilities, and empathy for others.

Jesse (Elisabeth Moss) is a rebellious seventeen year old who is drifting through adolescence without any purpose. She knows that her domineering and conservative Baptist father (Peter Gerety) is having an affair and that her mother (Robin Wright Penn) regularly drowns her sorrows in liquor. Her younger sister Katie (Stephanie Gatchet) is a born-again Christian and a star cross-country runner. She can't fathom Jesse's drinking and smoking or the shocking revelation that her sister has been shoplifting clothes and other items. Jesse's mother has to bail her out of prison and with a weary heart take back all the stolen goods.

Driving her car for a nighttime newspaper delivery route, Jesse comes into contact with a deranged Latino woman (Patrizia Hernandez) who has lost her children and wanders the streets of the town shouting out her grief and anger. This person and a dream convince Jesse that God has chosen her to give birth to the new Christ child. Contrary to her sister, she thinks that God could be a woman. Once Jesse realizes that she is special and has the divine within, her sensitivity toward others is heightened. Her empathy goes out to Frances (Daphne Rubin Vega) who is being battered by her husband. And in a magical moment, she comes home and sees that her mother is depressed so she slowly begins to dance with her in their small living room. They laugh and the clouds clear for both of them. Jesse is able to tap into her intuition and to see what is best for her and for others. She cherishes the memories of mothering Katie and realizes that her nurturing abilities are a gift from God.

Virgin is the first feature film written and directed by Deborah Kampmeier. The story is sympathetic to the plight of women in a society where men still treat them shamefully. A late night sexual encounter with Shane (Charles Socarides) is the source of many of Jesse's problems, yet she has no memory of it since he gave her a pill that knocked her out. When her father learns that she is pregnant, he orders her to repent in front of the Baptist church community on Sunday morning. Jesse tells the people that she loves everyone and that they, like her, can tap into the divine within. She walks out of the church followed by parishioners who are convinced that she has become possessed by Satan.

Although the dramatic intensity of Virgin is marred by too much dependence on shaky hand held cameras, the film stubbornly sticks to its complex and weighty theme of the spiritual transformation of a wayward teenager whose life is turned around when she realizes the divine within. Only the most adventuresome filmgoer will be able to appreciate the risks taken by Kampmeier as she explores the ways in which God speaks to us in these tough and strange times. 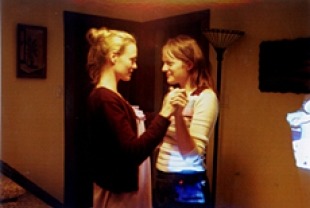