Directed by Kon Ichikawa
Offers a fascinating look at Japanese tradition under the onslaught of modernism in the story of class consciousness and marriage.

Based on Junichiro Tanizaki's popular novel, this Japanese film adaptation directed by Kon Ichikawa centers on four daughters of an upper-class merchant family in Osaka who are heiresses to a large fortune. The two older sisters, Tsuruko and Sachiko, are both married. They feel obligated to find proper suitors for the shy Yukikio and to keep the independent-minded Taeko from embarrassing the family by marrying beneath her class.

The Makioka Sisters is a soap opera in the grand Japanese manner with its presentation of sibling rivalry, domestic squabbles, scandal, and the ebbing of tradition under the onslaught of modernism. The film provides Westerners with a telling glimpse of class conflict and some of the comic repercussions of the Japanese system of selecting mates for young women. 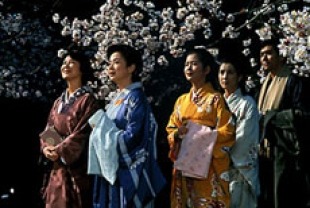