The Decline of the American Empire

Directed by Denys Arcand
Asks all the right questions about the sexual revolution and makes some interesting connections between eros and middle age.

This is a very intriguing French-Canadian movie written and directed by Denys Arcand. A group of Canadian academics are preparing for a get-together. While the men assemble a meal, the women exercise at a health club. The talk — in both instances — centers on sex. They compare notes on the physical prowess of their lovers, the thrills they have had, the creativity involved in keeping their love affairs hidden from their mates and their disappointments with the opposite sex.

Remy (Remy Girard), the most active hedonist in the group, states: "Love — the kind that makes your heart race — lasts two years at best. Then the compromises begin." His wife Louise (Dorothee Berryman), who has no idea of the extent of her husband's extramarital activities, is shocked when she learns the truth. Pierre (Pierre Curzi) has divorced his wife and is living with Danielle (Genevieve Rioux), a student who he met on a visit to a massage parlor.

Diane (Louise Portal) has left her philandering husband and begun a sadomasochistic affair with Mario (Gabriel Arcand), a rough, leather-jacketed drug dealer. Claude (Yves Jacques), an art history professor at the university, is a homosexual who is quite upset about a mysterious illness which has overtaken him. And Dominique (Dominique Michel), author of a new book on happiness and cultural values, shatters the evening's festivities by revealing that she's slept with both Remy and Pierre. Her lover for the night is Alain (Daniel Briere), a young student who is infatuated with her worldly sophistication.

Arcand's The Decline of the American Empire asks all the right questions about the sexual revolution and makes some interesting connections between eros and middle age, eros and cultural bankruptcy, and eros and marriage. For those who savored the civilized talk of Eric Rohmer's My Night at Maud's and Alain Tanner's Jonah Who Will be 25 in the Year 2000, this movie will be especially appealing. 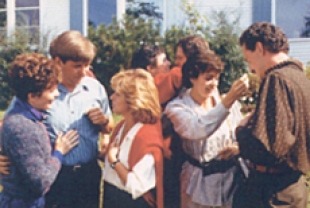