Directed by Richard Loncraine
Proves that sometimes it pays not to have your eye on the prize and to just go out there and play with wild abandon.

Peter Colt (Paul Bettany) is a 31-year-old English tennis player who was once ranked 11th in the world but has fallen to 119th, an unremarkable feat in his self-deprecating mind. His body tells him that he has seen better days and all the strong, young, and fast new players make him feel like a dinosaur. That is why Colt has made the decision to retire after Wimbledon; he has already accepted a job teaching tennis at a country club.

This Englishman cannot call upon his parents for much support since they are in the midst of a major squabble: his father (Bernard Hill) has moved into a treehouse in the backyard to avoid his angry wife (Eleanor Bron), who is disappointed that he doesn't pay any attention to her anymore. Colt's mischievous brother (James McAvoy) thinks he is a loser and regularly bets against him. Tired of the road and long-distance love affairs that don't work out, this tennis pro is actually looking forward to a change in his life.

The change that comes into his life is something completely unexpected — an affair with Lizzie Bradbury (Kirsten Dunst), an American tennis star who desperately wants to win at Wimbledon. Although her disciplinarian father (Sam Neill), who is also her coach, warns her to stay focused, she has developed her own philosophy that "a little fooling around can be good for your game." Colt has never tried to go with the flow, and he opens himself up to their romance with carefree abandon. Known as a player who clutches when the pressure is really on, he begins winning matches. Lizzie feeds his ego and tells him that he is a better player than he knows. As he rises in the standings and is seen at last as a genuine contender, he even beats his practice partner and good friend, Dieter (Nikolaj Coster-Waldau). Can he go the distance and win the accolades of the English fans? Or will his self-doubts get the better of him?

Richard Loncraine (Richard III) directs this romantic comedy and draws out a fine performance from Paul Bettany is his first role of this type. From the opening scenes through the dramatic finale, he wins our affection and support with his portrait of a journeyman tennis player. John McEnroe and Chris Evert are on hand as announcers to explain the nuances of the game to those who do not follow the sport.

This endearing movie makes the valid point that in athletic competition, as in everything else that truly matters, there comes a time when letting go and playing with wild abandon is the only way to go. 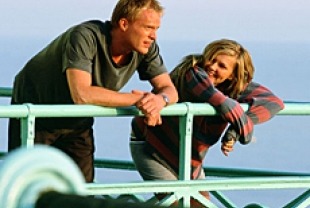