Directed by Walter Salles
An extraordinary drama about the spiritual transformation that turns an intense young man into a revolutionary.

In 1952, 23-year-old Ernesto Guevara de la Serna (Gael Garcia Bernal) is two years away from completing his studies to become a doctor. His best friend Alberto Granado (Rodrigo de la Serna), a 29-year-old biochemist, has asked him to come along on a 5,000 mile journey on his motorcycle to see the continent. They will begin in Buenos Aires and travel across the Andes into Chile, through the Atacama Desert to Peru, and then into Venezuela. Ernesto's father is worried about his son's safety and gives him a gun. This intense young man is moved by the love of his family as they stand by the curb and wish him well. Then he and Alberto aboard "La Poderosa" (the Powerful One) and head out for their adventure. They barely miss crashing into a bus — a prelude of things to come as the motorcycle gives them all she's got, despite sputtering, leaks, and a bad muffler.

The first layover is in Miramar where Ernesto's fiancée lives on a large estate with her wealthy parents. He has brought her a puppy to try and appease her, but Chichina (Mia Maestro) is very disappointed about not seeing him for so long. She withholds sex as punishment but gives him 15 American dollars to purchase a bathing suit for her. Amidst many financial woes, Ernesto will hold onto her money even though Alberto continually tries to wrest it from him.

Not long after they are on the road again, the Mighty One breaks down. Tired of his friend's criticism of his arrogance and aloofness, Alberto places a story in the local newspaper about the visit of two touring doctors working on a cure for leprosy. It is enough to get a mechanic to fix their motorcycle and them invited to a local dance. However, when Alberto comes on to the wife of the man who fixed their bike, they are forced to make a hasty exit from town.

As they continue their journey, the upper-middle-class Ernesto is deeply angered by the poverty that he sees among tenants who have been kicked off their farms by wealthy landowners and indigenous peoples who have to fend for themselves by picking fruit or other menial labor. He is very taken with a penniless husband and wife who have been persecuted for their Communist ideals and forced to seek labor in the dangerous mines. His righteous indignation comes to the surface when he criticizes a man who hires men to work underground for the Anaconda Copper Company owned by an American firm, but does not provide any water for them. Ernesto curses the manager and throws a rock at his truck. In a vivid scene that conveys the hopelessness of these itinerant workers, Ernesto and his buddy are riding in the back of a truck with two peasants. "That cow is going blind," he remarks, and the young man responds: "So? All it will see is shit." Ernesto is stunned by the beauty of the ancient civilization of Machu Picchu and appalled at the rapaciousness of city life in Lima.

Brazilian director Walter Salles has made another film about justice issues that most American directors would not touch with a 50-foot pole. Similar to Central Station, which probed the dynamics of compassion, and Behind the Sun, which examined a way to break the cycle of revenge in a rural community, this extraordinary drama delves into the spiritual transformation of a sensitive young man as he is exposed to a world of suffering and deep poverty. It is based partly on Che Guevera's own memoir and Granado's book Travels with Che Guevera.

The climax of the journey comes when Ernesto and Alberto meet Dr. Pesce (Gustavo Bueno) who has arranged for them to work as volunteers at a leper colony on the Peruvian Amazon. The physician, a leading authority on the disease, gives them a copy of his unpublished novel and asks for their response. Alberto says it is very good but the always blunt Ernesto advises him to stick to medicine. The doctor is pleased with this young man's honesty.

At the leper colony, Ernesto is taken aback at the rules and the regulations of the nuns who serve as nurses and caretakers at the place. They force everyone to wear gloves around the lepers and will only serve dinner to those who attend mass. Ernesto rebels and takes a special interest in a young woman whose arm is badly disfigured. He stays with her most of the night and convinces her to have it treated. He reveals the same selflessness he demonstrated in another town when he gave some of his medicine for his severe asthma to a dying woman.

At a party to celebrate his 24th birthday, Ernesto gives an inspiring speech about his hopes that one day all the diverse peoples of the continent will acknowledge and celebrate their unity. He raises a glass and toasts Peru and "a United America." Then in an act of spontaneous solidarity with the lepers he has served, Ernesto swims across the Amazon, which segregates the leper colony from the hospital, laboratory, and living quarters of the staff. This crossing over to the other side to say farewell to his outcast friends marks the transformation of Ernesto's heart. He has decided to fight for justice and align himself with the poor and the downtrodden.

The world would soon know him as Che Guevara. By the time of his execution in Bolivia in 1967, he had passed into myth. Jean-Paul Sartre called him "the most complete man in history" and in 1968 with youthful protests kicking up around the world the slogan "Che lives" appeared on walls from Paris to Berkeley and everywhere else where change was in the air.

It was a long and challenging journey for this earnest Argentinian who didn't have the faintest idea of what lie ahead of him when he took off on a motorcycle journey in 1952. It forged his character and set his course as a revolutionary who would advise the rest of us, "Always be capable of feeling deep inside any injustice committed against anyone anywhere in the world." 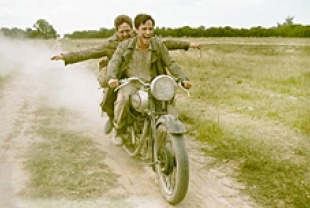 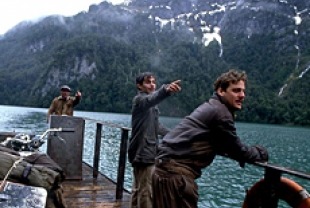 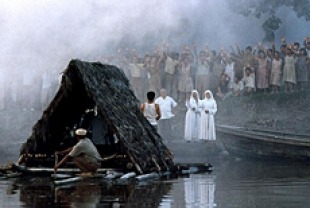