Directed by Sandi Simcha Dubowski
A riveting documentary about the suffering and loneliness of gays and lesbians believers shunned by members of the Orthodox Jewish community.

Over the years, we have been personally enriched by the colorful and poignant stories of everyday spirituality from the Hasidic Jewish tradition. The wisdom of so many rebbes from Eastern Europe has informed our understanding of what it means to be human. We have also appreciated the rich rituals of Orthodox Jews whose intense devotion to God is inspiring. But this riveting and heart-breaking documentary directed by Sandi Simcha Dubowski reveals a terrible blind spot in these two conservative Jewish groups. They both unflinchingly condemn homosexual behavior as an abomination. Believers cite Leviticus 20:13 and a passage in the Shulchan Aruch which advocate punishment of homosexuality by the administration of lashes or by death. What makes this documentary so poignant is the yearning on the part of many gays and lesbians who have been expelled from the Jewish Orthodox community to be accepted back into the fold. But judgment and condemnation have made them outsiders, and they have been forced to find alternative religious paths.

David, a Los Angeles resident, confesses that he has gone through a rigorous diet of figs and an aversion therapy program designed to help him change his sexual orientation from gay to straight. He regularly prays and just can't believe that the tradition he loves has excluded him. In a touching trip to Israel to visit a beloved rabbi, he is told that his homosexuality is still unacceptable and that the only course open to him is to practice celibacy.

"Devrah," a lesbian who lives in Israel with her husband, shares some of the pain and loneliness she carries in her marriage. "Leah" and "Malka," a lesbian couple in Miami, follow Orthodox rituals in their life together in love but still are hurt by the ways in which their birth families refuse to accept them. Mark, who was thrown out of seven yeshivas for his homosexual lifestyle, is now HIV-positive. He marches in a Tel Aviv gay parade as a drag queen but in his heart misses the community and the joy of studying in a yeshiva. Israel, the most angry homosexual in the group, breaks down before the camera as he talks about having had electroshock therapy in the past. He also is treated shabbily by his elderly religious father who refuses to meet with him personally after receiving Israel's loving letter.

Steven Greenberg, the first openly gay Orthodox rabbi, speaks out for more compassionate treatment of those who have been shunned for their sexual orientation. Several therapists give accounts of the bizarre treatments that have been used to try to make gay men become straight. Dubowski wisely uses subtitles to fill in some of the explicit religious terminology used in the Orthodox tradition. He makes expert use of silhouettes to protect the identity of many of those interviewed.

The hatred; the intolerance; the indifference to the pain, suffering, and loneliness of those they have hurt; and the inability to express either compassion or forgiveness are scourges upon the Orthodox Jewish community. Along with so many like-minded homophobic Christian fundamentalists, they need to be held in our hearts in love and prayer that one day they will see, acknowledge, and honor the sacred contributions of gays and lesbians to the spiritual renaissance of our time.

The DVD has an entire disk of extras, and they are well worth your time. A featurette "Trembling on the Road" looks at the worldwide multifaith movement sparked by the film. Director Dubowski observes that the film is speaking to gay and lesbian people of all traditions and others as well: "This is a film about the outsiders, who felt like they didn't fit in their community, in their family, growing up." He elaborates on some of his decisions in the film during in a 20-minute interview. Another short piece focuses on the silhouettes used to depict religious rituals, including an Orthodox wedding in which all the actors are gay or lesbian. Dubowski calls it "enacting a world yet to come." Other extras include conversations with rabbis, a short film, a deleted scene, and an explanation by Rabbi Steve Greenberg, the first openly gay Orthodox rabbi, of the atonement ceremony for sexual sins. The DVD also has a glossary and links to international organizations. More information about the film and the movement can be found at the website www.tremblingbeforeg-d.com. 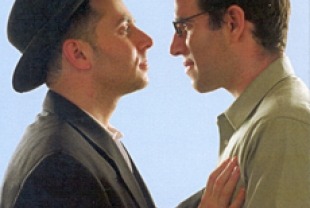