Directed by Alain Corneau
A fascinating French film set in Japan about power in the workplace and the yearning that fuels a cross-cultural experience.

Amelie (Sylvie Testud) is a Belgian who is in love with Japanese culture. She was born in Japan and spent five years there before being taken to Europe. Now she has returned to work as a translator for the Yumimoto Corporation, which has many businesses. The yearning to be Japanese at last is within her grasp. But Amelie, a college graduate who was trained as a teacher, is quite unprepared for the corporate culture she encounters.

She has three bosses: Mister Omochi (Bison Katayama), a disagreeable vice president who enjoys humiliating his employees in front of each other; Mister Saito (Taro Suwa), who comes up with the most degrading jobs for the only Westerner in the company; and Fubuki (Kaori Tsuji), who starts off as Amelie's pleasant superior but then turns into her arch-enemy. Much to her surprise, she is ordered to stop speaking when some clients learn that she speaks perfect Japanese. These men are frightened about a foreigner finding out about their business dealings.

In one instance after another, Amelie goes against the grain of Japanese corporate politics and etiquette. She starts out serving tea, coffee, and coke to each member of the office staff and then, after one gaff, is assigned to the photocopy room for hours of tedious work. Then it is on to accounting, where she makes many errors. Finally, Fubuki orders her to clean the rest rooms. Unable to lose face, Amelie endures these hardships and humiliations. Reaching the lowest and most demeaning job in the corporation, she feels a strange liberation. And she extracts a small amount of pleasure when she comes up with a clever scheme in connection with the renewal of her contract.

Fear and Trembling is directed by Alain Corneau and based on a novel by Amelie Nothomb. Sylvie Testud puts in a stellar performance as a young woman whose yearning is thwarted and sent in some strange directions. Throughout her ordeals at Yumimoto Corporation, she looks out the window of the 44-floor skyscraper and has fantasies of flying out over the city of Tokyo. This fascinating film works as a cross-cultural exploration and as a glimpse of some of the unsavory sides of work in Japan. Several references are made to the movie Merry Christmas, Mr. Lawrence, which is set in a Japanese prison camp and deals with the conflict between Eastern and Western values. In both films, power is used as a weapon to shame and humiliate underlings. 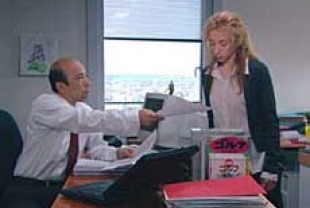