Directed by Alejandro Amenabar
One of the best films of 2004 with a bravura performance by Javier Bardem that is both tender and poignant.

"Death comes to everyone. However, in our society, due to great advances in medical knowledge and technology over the last few decades, death does not come suddenly or completely unexpectedly to most people. Questions of fate have become questions of choice," Justice Marie L. Garibaldi of the New Jersey Supreme Court has observed. Today, individuals generally have the right to consent to or refuse all types of medical care. This right was established by the legal doctrine of "informed consent," which holds that a patient can choose the medical treatments he or she wants after being informed by a physician of the probable consequences of his or her decision. But whether a person also has the right to die when technology can sustain his or her life is the crux of an ethical dilemma facing health care providers, patients, and families in many parts of the world.

Many people support voluntary euthanasia, which means assisting someone to refuse treatment who would otherwise be incapable of acting on his or her own; living wills and other advance directives cover this contingency. Other people go further and support active euthanasia, which is actually assisting someone in a procedure that will end his or her life. On the other side of this issue are those who argue that both voluntary and active euthanasia violate the sanctity of life. Believers in this approach maintain that only God has the right to decide when a person dies.

The Sea Inside, directed by Alejandro Amenabar is Spain's entry in the Best Foreign Language Film Category at the Academy Awards. The screenplay is based on the true story of quadriplegic Ramon Sampedro and his efforts to convince the courts of his right to die. For 28 years, he (Javier Bardem) has been in bed and taken care of by Manuela (Mabel Rivera), the compassionate wife of his brother Jose (Celso Bugallo) at their country home in Galicia.

Ramon has grown close to his nephew Javi (Tamar Novas) and become friends with Gene (Clara Segura), a right-to-die organizer. She has contacted Julia (Belen Rueda), a lawyer, to gather material for his court case. This sensitive woman, who has her own debilitative disease brought on by a series of strokes, learns that Ramon nearly died when diving into the sea near his home and hitting his head on the bottom. Before this tragedy, he traveled the world working as a mechanic on ships. Now Ramon cannot bear the thought of many more years of confinement and the lack of dignity that comes with being paralyzed from the neck down. He has created his own computer set-up and, as Julia discovers, written poetry about his feelings of anger, shame, and humiliation.

Another woman has entered his life — Rosa (Lola Duenas), a factory worker with two children who is a part-time radio disc jockey. After seeing a TV interview with Ramon, she meets with him to convince him not to give up on life but to fight with every ounce of his being. Ramon is used to advice from well-meaning able-bodied people but is convinced that he has an inborn right to choose whether he wants to live or to die. Although Rosa is taken aback by his forthrightness, she becomes very attracted to him and stays the course as a committed friend. A paraplegic priest comes for a visit with the intention of changing Ramon's mind but his chair doesn't fit through the door, and he is forced to send a young priest scrambling up and down the stairs delivering messages. His brother Jose agrees with the priest and believes that assisted suicide is immoral.

Director Amenabar has created a thematically rich drama that covers all the ethical points in the heated debate around euthanasia. But even more importantly, he illuminates the deep reservoirs of feeling aroused by Ramon in all those who come into contact with him. Especially moving are his love relationships with Manuela, Gene, Julia, and Rosa. The closing scenes in The Sea Inside reveal that true love can find its bearings in even the most difficult and extreme situations. This is one of the best films of the year with a tender and poignant performance by Javier Bardem. 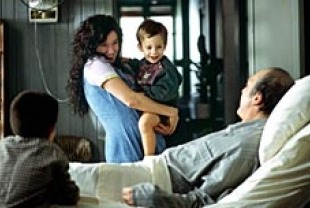