A Love Song for Bobby Long

Directed by Shainee Gabel
A heart-affecting drama fashioned with love, care, and creativity.

Our yearning to be loved for who we really are is so strong that it animates our souls again and again. It funds our capacity to be know and to be known. It enables us to cross borders into new territories, and it lies behind the great and holy ability to open ourselves to the cleansing power of forgiveness and personal transformation. Some of the best movies chart these fragile and mysterious movements of yearning in the lives of flawed human beings who are courageously seeking new life in strange places.

Eighteen-year old Pursy (Scarlett Johansson) is living in a trailer in Florida with an insensitive cad when she learns that her estranged mother, Lorraine Will, a singer, has died in New Orleans. They have not been in touch for years. Pursy arrives two days after the funeral and finds out that her mother has left one-third of her run-down house to her and the other two-thirds to Bobby Long (John Travolta) and Lawson (Gabriel Macht).

Bobby was once a highly respected literature professor at an Alabama University until a fight and an accident ended his career. He fled to New Orleans, trying to bury the past in a daily deluge of liquor. Lawson, his one-time teaching assistant and protégé, is writing a biography about him. It's no wonder he hasn't gotten very far since the two men inhabit a hazy stupor of drunkenness.

Even though the place is in shambles, Pursy decides to move into the house in hopes of learning more about her mother. She discovers that Bobby loved her very much, as did Cecil (Dane Rhodes), who lives across the street and whose home is a gathering spot for various musicians and drinkers in the neighborhood. Here and there she picks up pieces of information about Lorraine, who was quite a beauty and a troubled woman.

Pursy has a fine time exchanging barbs with Bobby who doesn't like the changes she brings to their home. What really rubs him the wrong way is Lawson's puppy dog adoration for the newcomer. The writer suggests that this high school drop-out go back and finish her studies, especially when he learns that she has a dream of becoming a medical assistant. They all go through some hard spots before they begin to gel as an improvised family.

In her debut as a film director, Shainee Gabel has loosely based her screenplay on a novel by R. E. Capps. She is quite fortunate to have landed Scarlett Johansson for the lead role of Pursy, a feisty young woman who needs to find out more about her roots before she can fly into her dreams of a better and brighter life. Following her standout performances in Lost in Translation and Girl with a Pearl Earring, she continues to impress. This gifted actress vividly conveys the confusions, the disappointments, and the bravery needed to start her life afresh.

John Travolta is just right as the battered and bruised former professor who is fighting himself in a losing battle. Gabriel Macht puts in a memorable performance as his close friend who is linked to him by ties of both affection and guilt. The verbal exchanges between Bobby and Lawson are lively. They have a habit of throwing out quotations for the other to identify. One of them is from Robert Frost: "Happiness makes up in height what it lacks in length." Bobby valiantly tries to conjure up past moments of merriment and Lawson does his best to fight back the feeling that he'll never finish his book. Several crucial secrets about the past are revealed, and they give Pursy a chance to make some important decisions about what she wants to do with her life.

The laid-back setting of New Orleans provides the perfect backdrop for this Gothic tale of loves lost and lives abandoned. It is Pursy's need to find out more about her identity that gives this well-constructed drama its graceful dimensions. One day while talking with Lawson, she admits that she used to make up memories about her mother since she could remember so little about their time together. In one, her mother is singing and a nice man provides her with Shirley Temple drinks while she watches from a nearby stool. Later, at a bar in New Orleans, she meets an African-American who tells her that he used to give her Shirley Temple drinks while she listened to her mother sing. This is only one of the many magical moments in this heart-affecting drama that writer and director Shainee Gabel has fashioned with such love, care and creativity. 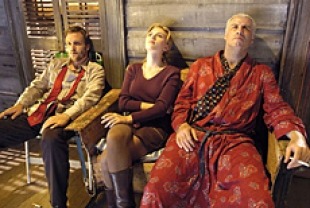