Directed by Paul Weitz
A totally engaging film about how two men -- a middle-aged advertising sales manager and a young Turk -- deal with the changes that end up transforming their lives.

Transitions can create scary times in our lives. We lose our footing and can no longer rest in things as they are. Sometimes the rug is pulled right out from underneath us, and it's all we can do to stay standing. Change comes in many guises, and in these days, it can happen in the work arena as often as anyplace else. The average American will experience five or six career changes in a lifetime. It is best to be prepared for the transitory nature of whatever work you do. Sadly enough, this subject has not been dealt with in many movies.

In Good Company, written and directed by Paul Weitz (About a Boy), is a well-acted movie about coming to terms with job change. Dan Foreman (Dennis Quaid) is the director of advertising sales for a national sports magazine. He's worked there for 23 years, and although he's done very well, he still has to take out a loan to pay for his oldest daughter Alex's (Scarlett Johansson) tuition at New York University. Then his wife Ann (Marg Helgenberger) springs an even bigger surprise on him: she is pregnant. That's why Dan goes into shock when he learns that a conglomerate has purchased their parent company and his new boss is to be Carter Duryea (Topher Grace), a twentysomething who has been tagged a winner in the organization. His devotion to the business has resulted in a divorce from his wife (Selma Blair); all he has for companionship is a fish in an aquarium.

Dan is less than thrilled when Carter tells him that he has the potential to be an awesome wingman. The new mover and shaker fires three people in the office, including two salesmen who were hired by Dan. In one of the film's telltale scenes, Carter invites himself over to Dan's for dinner after a Sunday work session at the office. The brash young man responds to many questions posed by Dan's teenage daughter. He is also very attracted to Alex. They begin a secret relationship which demonstrates how Dan's oldest daughter is in a full-scale rebellion against his controlling nature.

In Good Company could easily have made Carter into a caricature and a nasty villain to boot. But thanks to the subtle screenplay by Paul Weitz, this young man undergoes a transformation that is entirely believable. Dan provides a suitable model for a middle-ager forced to assess what is right in his relationships and necessary in his work life. Quaid and Grace put in top-drawer performances that give this Hollywood film something very special — interesting characters adjusting to circumstances that change them both. 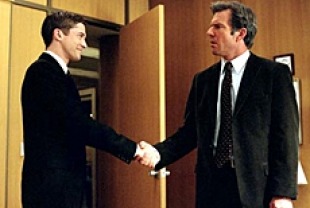