Directed by John Boorman
A bold drama set in South Africa that salutes forgiveness and restorative justice as alternatives to revenge and the continuing cycle of violence.

Following the downfall of apartheid in South Africa, Archbishop Desmond Tutu said: "To pursue the path of healing in our nation, we need to remember that we have endured. But we must not simply pass on the violence of that experience through the pursuit of punishment. We seek to do justice to the suffering without perpetrating the hatred aroused. We think of this as 'restorative justice.' " This spiritual perspective goes beyond the natural human impulse to give in to revenge and wreck havoc upon one's enemies. It emphasizes reconciliation rather than retribution.

Many in the West were stunned in 1996 when the South African government chose this approach when they set up the Truth and Reconciliation Commission (TRC) to investigate the human rights violations that took place under years of apartheid. Hearing were held in different sites around the country. Victims told their stories to the TRC commissions, and perpetrators were offered amnesty if they gave details of their crimes and expressed contrition. Followed closely in South Africa, the TRC hearings were a revelation to people all over the world who had been unaware or indifferent to the vicious and deplorable treatment of blacks who were imprisoned, tortured, raped, and, in many cases, murdered. Some 21,800 victims came forward, and 1,163 perpetrators were given amnesty in an attempt to start the process of healing in a country torn apart by racial hatred and violence.

The Afrikaans poet Antjie Krog was chosen to cover the hearings for state radio and several newspapers. This courageous and bold film directed by John Boorman (The Emerald Forest, Hope & Glory, Beyond Rangoon, The Tailor of Panama) is based on her book Country of My Skull, which has been adapted into a screenplay by Ann Peacock. In My Country offers us a rounded and revealing portrait of this radical experiment in restorative justice. It also is a tender and touching study of forgiveness and the African spiritual principle of Ubuntu — "a person is a person through other persons" — which emphasizes that the suffering of one person is felt by all. Although many of the characters in the drama are fictional, the drama does manage to convey the spirit of the moment with integrity.

Langston Whitfield (Samuel L. Jackson) is a Washington Post journalist who arrives in South Africa to cover the TRC hearings and to interview Col. De Jager (Brendan Gleeson), a bloodthirsty police officer reputedly responsible for the death of 60 blacks. He wonders whether the structure of the hearings will result in nothing more than leniency toward evil advocates of apartheid.

This view is the exact opposite of the one held by Anna Malan (Juliette Binoche), a white Afrikaans poet, who is proud that South Africa has turned to the innovative and healing process of restorative justice. She is deeply upset that her father and brother still cling to a rigid Afrikaans feeling that whites are being treated shamefully by the new government. Thrown together as members of the international press corps, Langston and Anna immediately rub each other the wrong way: she is upset with his African-American anger and impatience, and he has no understanding of her love for South Africa, the country of her birth.

When Anna hears the painful stories of blacks who suffered under the oppressive politicies of apartheid, her grief and shame come to the surface again and again. Whitfield finds himself identifying with her vulnerability and when she takes him to visit her family, he senses the real courage of her convictions which run counter to theirs. Attracted to each other physically, they are both surprised when they have an affair. It is their way of briefly escaping the relentless accounts of murder and torture and rape in the TRC hearings. It also mirrors the changing relationship of blacks and whites as a result of the process going on in the country. But realizing that by being with Langston, she has betrayed and hurt her loving husband, Anna decides she must take steps to heal the wounds to her marriage.

Other aspects of the South African experiment in forgiveness and reconciliation are explored in Whitfield's interviews with De Jager and in the experiences of Dumi Mkhalipi (Menzi 'Ngubs' Ngubane), Anna's assistant. In the first we see how the perpetrators of the violence justified their behavior by seeing it as a battle against "terrorists." Through the second, we learn that not everyone in the black community was behind the concept of restorative justice.

In a time when the world community continues to ignore political and human rights violations in Africa, it is salutary to see two movies in release now that deal with events there many Westerners know very little about. Both Hotel Rwanda and In My Country open our eyes to human violence and the heroism of those who are able to stand up against it armed with the spiritual practices of compassion, love, and forgiveness. 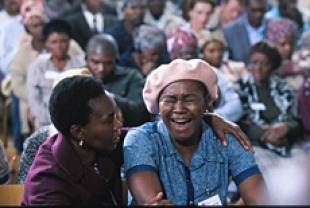 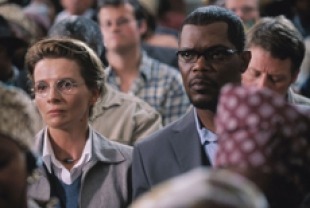 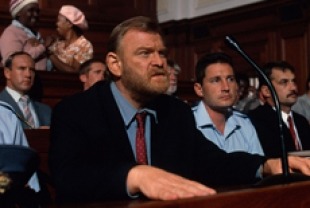 R - language, including descriptions of atrocities, a scene of violence