Directed by Danny Boyle
An endearing, charming, creative, and spiritually uplifting movie about miracles, money, saints, and the divine love that will not let us go.

"Leaving the miraculous out of life is rather like leaving out the lavatory or dreams or breakfast," Catholic novelist Graham Greene once wrote. Magical happenings and experiences that defy logic, that can't be explained by our senses or our reasoning, are part of our lives, but we don't always recognize them as signs of God or intimations of grace. According to Marianne Williamson, "we are here to participate in a glorious subversion of the world's dominant, fear-based thought system. There are only two core emotions: love and fear. And love is to fear as light is to darkness: in the presence of one, the other disappears. As we shift our perceptions from fear to love — sometimes in cases where it's not so hard and ultimately in cases where it takes spiritual mastery to do so — we become miracle-workers in the truest sense. For when our minds are surrendered to love, they are surrendered to a higher power. And from that, all miracles follow."

Millions is about a pint-sized miracle worker who has close encounters with the saints of yesteryear and possesses an open and generous heart. He believes that God has called him on a special mission. This is the most endearing, charming, creative, and spiritually uplifting movie since Amelie set our hearts swooning. It is about miracles and money and saints and the divine love that will not let us go. Mixing the everyday activities of two young English boys with some astonishing dollops of magical realism, Millions will challenge you to see afresh the wonders that abound in the lives of all those who step into their calling as saints doing good things in a world off-tilt due to greed, clutching after possessions, and lusting after new goodies.

Nine-year old Anthony (Lewis McGibbon) and seven-year old Damien (Alex Etel) are trying to cope with the drastic changes in their lives. Their mother has died recently, and their father, Ronnie (James Nesbitt), has decided to move the family to a new housing development on the outskirts of Liverpool. While his older brother adapts well to the new school they attend, Damien startles the teacher and his classmates with a lengthy and passionate summary of the lives of saints. The exercise was to name people the students admire; the other kids all named sports figures.

Using some large boxes left over from their move, Damien constructs a playhouse down by the railroad tracks. He gets quite a kick out of the jostling he takes when a train whizzes by and his body shakes. One day St. Clare of Assisi (Kathryn Pogson) shows up for a brief chat. Damien is surprised that she smokes but the saint tells him that in heaven anything is possible. She likes being the patron saint of television: it keeps her busy.

Life changes for Damian when the solitude of his cardboard sanctuary is shattered by the arrival of a suitcase full of cash. The young boy is convinced that it has been dropped from heaven by God. His brother, a financial wizard, decides they should find some way to invest the money, which adds up to a quarter million pounds ($411,662). Anthony also worries about the government taking forty percent of the cash for taxes. But a bigger problem looms on the horizon: England is a week away from adapting the Euro as its currency, and unless they get the money changed, it will be worthless.

St. Francis of Assisi (Enzo Cilenti) is the next saint to rendezvous with Damien. He convinces him that his impulse to give all the money away to the poor is the right one. But when the brothers try to take the homeless in their neighborhood to dinner at Pizza Hut, they discover that giving away money is not so easy. Anthony grows increasingly frustrated when he learns that Damien has given away a wad of cash to some Mormon missionaries in their housing complex, who promptly went out and purchased a digital television, a microwave, and a foot spa.

At school, the good-hearted boy thinks he's found the perfect solution when he hears a plea by Dorothy (Daisy Donovan), an enthusiastic charity worker, who is explaining the Euro conversion and raising money for the needy at the same time. When she takes an interest in their father, the boys are less than pleased. They are not ready to adapt to another change in their lives! Later a martyred saint meets with Damien and convinces him that the greatest gift of all is the gift of water to a desert community that needs a well.

This extraordinary film is directed by Danny Boyle (28 Days Later). From the opening shot of the two brothers riding their bikes down a path through a field of yellow flowers, we realize that this story will be carried on wings of the creative cinematography of Anthony Dod Mantle (Dogville) and the daring and enchanting screenplay by Frank Cottrell Boyce (Welcome to Sarajevo, Code 46). The entire movie rests on the small shoulders of Alex Etel whose valiant attempts to come to terms with grief, the role of saints in history, the meaning of miracles, and the confusions and complexities of the human obsession with money form the central thrust of the story. This child actor is very intense, and his seriousness comes across as zeal. He is "weird," as his brother calls him, but he also is a well-realized soul whose generosity and compassionate heart make him very special.

The family's struggles to deal with the money adumbrates into a series of fascinating plot developments, including the appearance on the scene of the robber (Christopher Fulford), an enactment of the Nativity play, and appearances by other saints: St. Joseph (Nasser Memarzia), St. Nicholas (Harry Kirkham), and Gonzaga (Cornelius Macarthy). Pay special attention to St. Peter's (Alun Armstrong) account of the feeding of the 5000 for it contains important clues to the nature of true generosity as the secret bounty of the universe.

Be still
surprised
by the day today.

Be still
surprised
by the day-to-day
miracles.
— Kevin Anderson in Divinity in Disguise 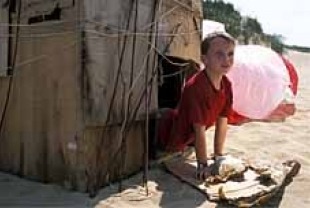 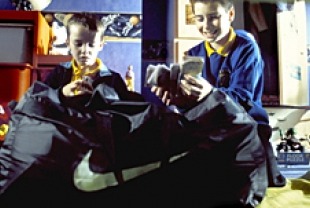