The Upside of Anger

Directed by Mike Binder
An engrossing and well-acted psychodrama about the toxic side-effects of this potent and volatile emotion.

Anger is an emotion that separates; it cuts us off from others and causes internal pain as well. It can mutate into resentment, a long-term destructive emotion. Cold anger can settle into our psyche and harden our hearts. Its toxic side-effects pervade our words and deeds and spread like poison into the lives of those around us. As a response to loss, it is not the best route to travel.

The Upside of Anger, written and directed by Mike Binder, is a hard-hitting and engrossing film about a woman whose life becomes consumed with anger. Other films have dealt with the negative fallout of this potent emotion but this one is so well-acted and realistic that it speaks to us forcefully.

Suburban housewife Terry Wolfmeyer (Joan Allen) is thrown for a loop when her husband of 20 years loses his job and runs away with his Swedish secretary. She plunges into a burning anger against him for this betrayal and begins each day by trying to bury her rage in booze. But it doesn’t help. As her youngest daughter Popeye (Evan Rachel Wood), the narrator of the film, states, all the sweetness of her life in the past has vanished and been replaced by rage against her husband. This teenager's way of dealing with the tension in the household is to create a video dealing with the destruction in the world brought on by anger and violence.

Terry's oldest daughter Hadley (Alicia Witt) doesn't get along with her mother and can't wait to escape to college. But things get complicated when she announces that she is pregnant and is going to get married. In a scene where the family is invited to lunch by the groom's father and mother, Terry drinks too much and embarrasses Hadley.

Things aren't going too well with her other two daughters either. She has it in her mind that all four daughters must go to college. She is upset with Emily (Keri Russell) who wants to be a ballerina and has devoted all her time and energy to dance. Then as a final straw, Andy (Erika Christensen) announces that she has taken a job at a radio station working for Shep (Mike Binder), a middle-aged producer, who immediately begins a sexual relationship with her. This infuriates Terry who views him as a despicable person.

He happens to be a friend of Denny (Kevin Costner), a neighbor who makes a habit of dropping by to drink with Terry once he finds out about her plight. He is a former baseball hero who has descended into a funk. His radio show, which is produced by Shep, is not getting many listeners since he stopped talking about the sport that made him famous. Denny is the kind of laid-back jock who often has trouble finishing sentences that he starts. At first, Terry is glad to have someone to drink with, and then she initiates a sexual relationship as part of her campaign to get even with her departed husband. None of this sits too well with her daughters who want their old mother back.

The Upside of Anger works because of the top-drawer performance by Joan Allen and likeable ones by Costner, Wood, Russell, Witt, and Christensen. Buddhist writers Bernard Glassman and Rick Fields have observed: "Anger can become one of our juiciest ingredients. If we have a tendency toward anger, we don't deny it or block it out. But we don't observe or analyze it either. We let our anger arise, so that we can feel anger fully. We sit with the anger. We become the anger. When we do that we can see what anger is all about. The anger will transform of itself — into determination, for example." We can't tell you the surprise that enables Terry to move beyond her rage, but the ending makes perfect sense and speaks volumes about the power of emotions to impact our lives and the lives of those closest to us.

DVD features include two commentary tracks, one with writer/director Mike Binder and the other with actress Joan Allen. The disc also contains deleted scenes. 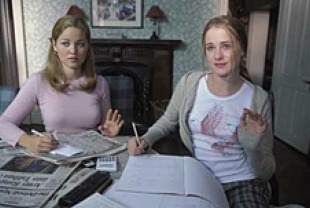