Directed by Maurizio Benazzo, Nick Day
An engrossing documentary that vividly presents the variety and vitality of Hindu devotion.

Many spiritual seekers in the West are fascinated by India, the birthplace of Hinduism, one of the most tolerant religions in the world. Those who do not have the time or the daring to travel to this exotic land can journey there via this questing documentary by Maurizio Benazzo and Nick Day.

Every 12 years the Maha Kumbh Mela takes place in northern India at the confluence of the Ganga, Yamuna, and Saraswati Rivers. Pilgrims come from all over the world to experience this great gathering of 70 million people and the ritual bathing over a six-week period. Thanks to the energy and creativity of these two adventuresome filmmakers, we can experience the extraordinary sights and sounds of the 2001 event with laypersons, devotees, gurus, fakirs, swamis, and yogis.

Benazzo and Day are there to film as spiritual teachers and their followers set up thousands of camps. Swami Krishnanand, a Hindu monk, serves as an interpreter for several seekers (a nurse practitioner, a student of religious studies, an independent young woman) who have made the pilgrimage from the West. Among those he interviews are Bharti Urdvahu, who has held his arm in the air for 20 years as a spiritual discipline and as an act of willpower; Pilot Baba, whose Japanese devotee spends three days underground demonstrating samadhi practice; Divine Mother Purna Praghamataji, who talks about the value of renunciation; Kali Baba, an African sadhu who advocates moving beyond our world of separations; Devraha Hans Baba, who sends his blessings to all within earshot; Ramanand Puri, who emphasizes the importance of meditation; and Avadhoot Baba, who walks on nails and sits on a throne of spears over a fire. The Dali Lama appears as an honored guest at this spiritual festival and salutes the tolerance of Hindus and the great challenge of the twenty-first century — for all religions to work together on the common responsibility "to save humanity, improve the world situation, and protect the environment."

The filmmakers vividly convey all the vitality, joyful abandon, and tumult of voices in this tent city. A woman dances in ecstasy in front of her guru, a group of people rescue two lost children and bring them back to their distraught mother, hundreds watch plays about gods and goddesses, groups chant around the clock, processions come and go with devotees dancing and playing instruments, and, of course, hucksters roam the crowds looking for quick sales of magic potents and other religious paraphernalia. The climax of the Kumbh Mela gathering comes when the pilgrims prepare to take ritual baths in the sacred waters of Mother Ganges. Thousands of naked naga babas lead the way, purifying the water for the many men, women, and children who follow.

Short Cut to Nirvana: Kumbh Mela is an engrossing documentary that admirably presents the variety and vitality of Hindu devotion. 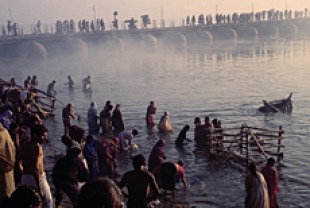 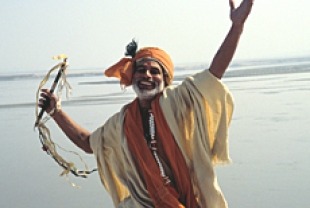