The Hitchhiker's Guide to the Galaxy

Directed by Garth Jennings
The space adventures of a dapper young Englishman who learns to treasure his towel, to leap at love when the opportunity arises, and to never rest on his laurels as a member of the human race.

If you yearn to discover the Ultimate Question to Life, the Universe and Everything, then this witty and funny screen translation of the first novel in a series of five by Douglas Adams will appeal to you. It is directed by Garth Jennings based on a very clever screenplay by Adams and Karey Kirkpatrick (Chicken Run).

The opening sequence gives you plenty of clues to the zaniness to come. We learn that the leaping dolphins at a water park are actually "a brainier species than man" and as such they know that the end of the world is coming. Although the spectators at their show are clueless, the dolphins say goodbye and politely thank humans "for all the fish." Simple courtesy is a sign of civilized beings and is not found too often in human interactions. Then the dolphins leap mysteriously into the air and vanish.

Turns out the end of the world is coming. This is a familiar tradition in science fiction tales and here the end signals the beginning of a fanciful romp in outer space and a quest for the meaning of life in worlds that boggle the mind and raise one question after another. The mantra that is used sparingly throughout the film is "Don't panic." It is a good one with much relevance to our world and our tendency to over-react to events that threaten us or go beyond our flimsy ability to understand them.

Arthur Dent (Martin Freeman) is a mild-mannered and indecisive Englishman whose rustic home is about to be bulldozed to make room for a freeway bypass. While he's trying to stop the construction crew, Ford Prefect (Mos Def) arrives with even more startling news: the end of the world is coming in ten minutes. How does he know? He's really an alien from outer space. Ford grabs Arthur, who once saved his life, and returns the favor by zipping him aboard a Vogon spaceship that is part of the fleet sent to destroy the Earth. When these ugly creatures discover the hitchhikers, one of them tortures them with bad poetry.

Ford tells Arthur that everything he needs to know can be found in a book titled The Hitchhiker's Guide to the Universe. Although it is filled with all kinds of helpful information it doesn't save them when they are dropped into space. The narrator (Stephen Fry) explains: "Space is big. You just won't believe how vastly, hugely, mind-bogglingly big it is." Miraculously and improbably, another spaceship called Heart of Gold picks up the two shaken hitchhikers. Arthur is thrilled to discover that the pretty woman aboard named Trillian is really Tricia Macmillan (Zooey Deschanel) whom he met at a London party and didn't have the courage to run away with when she suggested they go to Madagascar. Her companion is Zaphod Beeblebrox (Sam Rockwell), the galaxy's two-headed president. Also on board is Marvin the Paranoid Android (Warwick Davis and voice by Alan Rickman). This depressed robot is filled with an oversupply of self disgust and gloomy thoughts. The doors on Heart of Gold have been programmed to sigh when they open and close. This makes for a different experience coming into a room. It's one of our favorite details in the film, reminding us of the spiritual advice to pay attention to thresholds.

In trips to three different planets, Zaphod Beeblebrox is pursued by the intrepid Volgon bureaucrats who are masters of paperwork. Sometimes this works against them when they capture Trillian and are about to execute her for kidnapping the President of the Galaxy. In a satirical sketch that pokes fun at the English penchant for queuing up, Arthur manages to save her by filling out all the appropriate forms so the Vogons have to let her go. In another sequence, a story is told about two learned ones who seek the answer to the meaning of life. A super computer named Deep Thought (voiced by Helen Mirren) spends seven and a half million years calculating a response and comes up simply with "42." When the learned ones express their disapproval, they are told that the most important thing is the question about the meaning of Life, the Universe, and Everything.

In one of the most delightful adventures, Arthur, Ford and their new companions arrive on a planet that seems to sabotage their normal ways of being. For instance, whenever they have a thought, a hand reaches up through the ground and slaps them in the face. It is sort of like the Zen master slapping the meditation students on the shoulder when they lose concentration. Even better, the foursome pick up a Point of View gun at the request of Humma Kavula (John Malkovich), an intergalactic missionary who preaches the gospel of the big Handkerchief. When you fire this gun at someone, they instantly see things from your perspective. Can we order one for our home, for our community, for Congress, for the United Nations, for world leaders, for the winning class who have most of the money and power in the world?

So, there you have it: a wild and crazy picaresque romp through the galaxy with a young Englishman who learns to treasure his towel, to leap at love when the opportunity arises, and to never rest on his laurels as a member of the human race. Repeat the mantra "Don't Panic" when you get into situations that go way beyond your capacity to handle. And even if you can't program your doors to sigh, treat them as if they did it anyway. And since the Point of View gun is not yet available on Earth, you will just have to practice empathy and compassion on your own.

DVD features include deleted scenes, fake deleted scenes, additional guide entry, sing along "So Long & Thanks for All the Fish," "The Making of the Hitchhiker's Guide the Galaxy," 2 Wholly Remarkable Audio Commentaries, and a Set-Top Game: Marvin's Hangman. 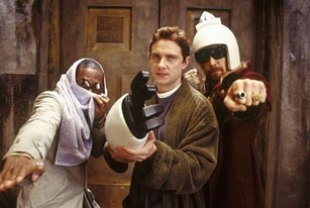 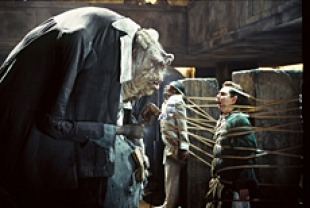 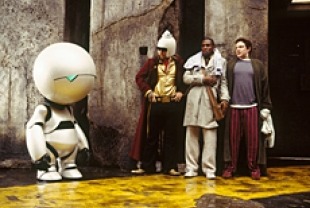 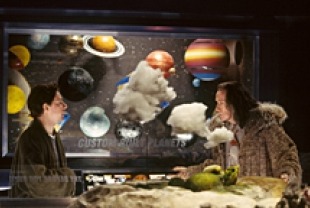 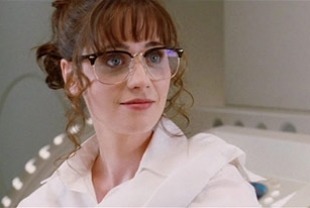