Directed by Werner Herzog
An extraordinary documentary by German filmmaker Werner Herzog on a Buddhist ritual, held in Bodh Gaya, India, and Graz, Austria, in 2002 that attracted thousands of pilgrims.

The legendary German filmmaker Werner Herzog traveled to India in 2002 to make a documentary on Kalachakra, the elaborate ordaining ritual for Tibetan Buddhist monks. Every two or three years, nearly a half million pilgrims travel to witness it at Bodh Gaya, India, where the Buddha sat under a tree and found enlightenment. A sand mandala signifying the wheel of time is meticulously created by monks and is meant to stir the seeds of enlightenment in Buddhists of all stripes. This intricate creation stands for the world of phenomena, the realms of consciousness, and the pure lands of the deities. Pilgrims from Nepal, Bhutan, Mongolia, Thailand, and Sri Lanka arrive in trucks or on foot. They endure heat, hunger, and thirst to get there. Those who are more well-to-do set up tents while the majority sleep on the ground.

Herzog shares an interview with a monk who took three-and-one-half years to arrive at Bodh Gaya: he did prostrations all the way for 3,000 miles. He has knobs on his wrists and a wound on his forehead from touching the earth with his head millions of times. What does he have to show for it? You can see in his eyes and visage a serenity that comes from such discipline and devotion.

Meanwhile thousands of other Buddhists are working on 100,000 prostrations facing the tree where Buddha was enlightened. Herzog playfully captures a small child kneeling on the earth and trying to mimic the prostrations of the adults around him. Other pilgrims gather around a stupa that has healing powers.

There are so many ways for the pilgrims to find happiness. One purchases a few birds and sets them free. Young monks gather excitedly to serve tea to the elders; it is considered an honor to be of service. One of the high points of the festivities comes when the monks throw gifts to the crowds, including barley dumplings which hold the promise of a long and prosperous life.

When the sand mandala is finally finished, it must be enclosed in glass since one touch or even a breath could destroy it. When the pilgrims learn that His Holiness the Dalai Lama has joined them, they gather in long lines to enter the place where he will speak. People toss their prayer shawls to the front just to have them in his presence. But the Kalachakra initiation cannot be completed since the Dalai Lama is not feeling well. His sadness spreads to the Tibetan Buddhists who have waited so long to be with him in this gathering.

Herzog travels to the next Kalachakra meeting, which is held in Graz, Austria, in 2002. The Dalai Lama is in good health again and 8,000 Eastern and Western Buddhists gather in a convention hall for the ceremonies. Herzog interviews a Tibetan Buddhist who has just been released from prison after serving 37 years. He describes the ordeals brought on by two statements of liberation for his people; he can't really put into words the joy he felt upon first seeing the Dalai Lama. The sand mandala ceremonies are completed, and it is destroyed in several minutes. Here is a stunning and unforgettable image of Tibetan Buddhism's acknowledgment of the impermanence of all things. The sand is gathered and released into a nearby river to flow out into the world as a blessing.

Herzog's engrossing documentary is a spiritual blessing for Buddhists and anyone else fortunate to experience it. There are several brief interviews with the Dalai Lama where he demonstrates his knowledge of Buddhist tradition and his hopes that all religions will practice love, kindness, and compassion in a world split apart by hatred, war, and misunderstandings. At one point, a smudge appears on the lens of the camera and Herzog casually wipes it off with his thumb. The director's sense of humor comes across when he photographs one bodyguard still on duty in the nearly empty convention hall. Back in India, he focuses on a single monk seated on his prayer cushion amidst 400,000 other cushions. The closing shot is of Mount Kalish in Tibet, which has been called a "precious jewel of snow." According to tradition, one three-day trip around the sacred mountain can wipe away the sins of a lifetime. Herzog catches the shimmering dots on the lake in front of the jewel shaped mountain in what becomes a breathtaking visual delight. 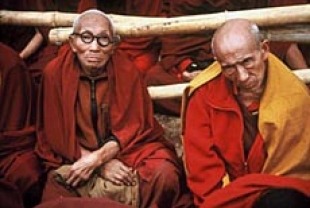 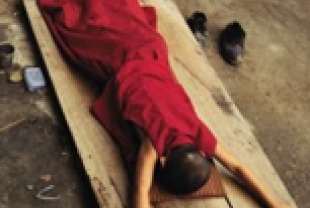 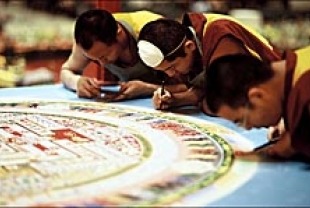 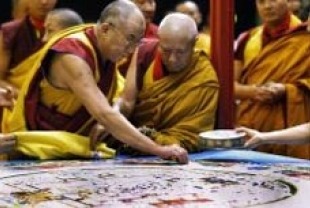