Directed by Hans Petter Moland
A tender and poignant cross-cultural tale of a young man's search for his father with a finale filled with grace and love and humility.

Binh (Damien Nguyen) is a twenty-year-old mixed-race man who lives with his foster parents in Hoa Nam, Vietnam, in 1990. He does menial jobs in the community and is looked down upon as Bui Doi, which translates as "less than dust" and is used to refer to Vietnamese children with American fathers. When he learns that his mother, Mai, is in Saigon, he heads off to the big city to find her. The only clue he has is a treasured picture of her and a tall American standing in front of a Saigon hairdressers shop. Much to his surprise, Binh finds her; she is a servant in a wealthy person's home.

Mai (Chau Thi Kim Xuan) has a young son, Tam (Tran Dang Quoc Thinh), and is very sick after years of hard work. Binh gets a job as a handyman in the same house, but after an accident there, the family must flee. Mai gives him all her money and orders him to take Tam with him to the United States where his father lives. Her wedding certificate says that he resides in Houston, Texas.

Binh begins his journey to "the beautiful country" with high hopes and a fortitude born from years of being treated poorly as an outsider. He is used to living with little or nothing. He and his little brother join "the boat people" refugee migration and wind up in a Malayasian refugee camp under armed guard. He soon learns that it takes a lot of money to gain passage on a ship overseas. Binh befriends Ling (Bai Ling), an industrious young woman who has sex with the guards in exchange for a ticket out of the prison. They eventually escape and are taken aboard a rusty freighter where they pay a high fee to join the other poor emigrants in the ship's hold. The captain (Tim Roth) offers Binh a job, but he declines. Nothing will deter him from his quest to find his long-lost father who one day mysteriously disappeared from Mai's life. Many the emigrants die on the terrible trip, including young Tam.

Once he reaches America, Bihn is forced into slavery working as a busboy in Chinatown and then as a delivery man. Ling lands a job as a bar girl in a karaoke joint and remains close to Binh. But he knows that her dream does not include him. When he discovers that as a child of an American G.I., he was entitled to a free flight to the United States and need not have gone through all the suffering he has endured, this zealous young man explodes in anger, walks out of his job, and heads off to Texas. On the trip there, he meets other poor and dispossessed souls just like him. Finally arriving at a suburban house, he learns from his father's ex-wife that she hasn't seen him in 20 year but she thinks he (Nick Nolte) is now working on a remote Texas ranch.

The Beautiful Country is directed by Hans Petter Moland from Norway. This richly developed cross-cultural drama speaks volumes about the struggle, the suffering, and the perseverance of Asian emigrants. Damien Nguyen does a remarkable job conveying Binh's patience and quiet dignity. The slowly unfolding steps in the eventual father and son reunion is handled with an understated respect for what both men have endured to reach this point in their lives. Moland does not rush these tender moments. Each gesture has significance for this pilgrim who has traveled so far and endured so much.

You will have to look far and wide to find a more tender finale to a film than the one in The Beautiful Country. It shows how grace and humility can shine in human beings when they lay down their egos and seek only to be present in love. 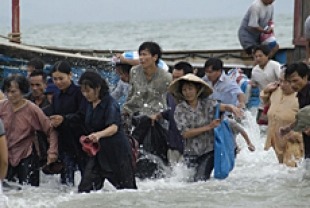 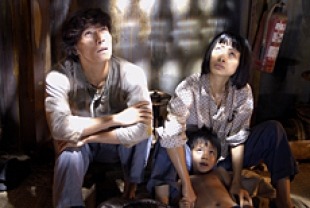 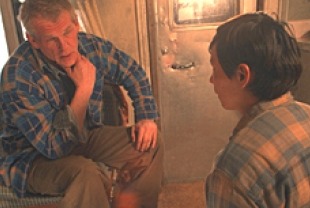