Directed by Paul Mazursky
The cross-country travels and discoveries of a 70-year-old man from New York City.

Harry Combs is a seventy-two year-old widower who lives in New York City with his faithful cat Tonto. He's the kind of guy who has no intention of fading slowly into his sunset years. Harry is glad to be alive. Although he misses his wife Annie, he enjoys chatting with his good friend Rivetowksi who hates capitalists. And then there's a song for every mood — ditties by Russ Columbo, Bing Crosby, Maurice Chevalier, and many others. Harry croons and Tonto meows. When he's evicted from his apartment, he s spouts lines from King Lear. His son wants him to stay with his family in the suburbs but Harry decides he wants a place of his own. So he begins an odyssey across the country, first visiting his daughter in Chicago and then his other son in Los Angeles.

Harry just naturally gets along with people — the used car salesman who tells him that a dose of strychnine can restore his sexual virility, a hitch-hiking runaway teen-age girl who's on her way to a commune in Colorado, a cowboy who sells vitamins and blenders, an Indian who is a genuine healer, a happy hooker, and a grandson who emerges from a period of religious silence as an individual beginning his own lifelong journey.

Writer and director Paul Mazursky has drawn out excellent performances from a very gifted cast: Herbert Berghof as the cantankerous Rivetowski, Phil Burns as Harry's loving but somewhat anxious son Burt, Ellen Burstyn as his lonely and cynical daughter, Melanie Mayron as his gregarious young traveling companion, Geraldine Fitzgerald as his long-lost first love, Joshua Mostel as his religious grandson, Chief Dan George as the Indian with a bag of herbal tricks, and Larry Hagman as Harry's perplexed son Eddie. Leading them all in the fun is Art Carney as the septuagenarian who believes that old age does not have to be one long prison sentence with no time off for good behavior. Harry is starting over; as he characterizes his life: "I'm just beginning to enjoy the mystery again. I have to look around for some more clues." Paul Mazursky has said of the film: "This is an important work to me in that it helps people to see that old people are not invisible. I was sick and tired of seeing movies in which the old people were either senile or bizarre. I wanted my hero to be real, cranky, funny — a man who at 72 is what he was at 25, only a little bit slower." Harry has a song in his heart and a smile tucked away for life's magic moments. And Tonto purrs for pleasure.

DVD features include an audio commentary with director Paul Mazursky. 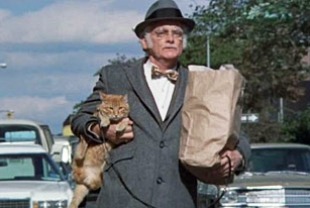