Schultze Gets the Blues

Directed by Michael Schorr
A delightful oddball German comedy about a retired mine worker's musical quest.

In the opening scenes of this oddball German comedy, three salt mine workers are retiring. A group sings them a song and they are each given a lamp made from a large slab of unprocessed salt. Schultze (Horst Krause) is the only one who is still single, living in a dingy house with a garden and gnomes in the front yard. Jurgen (Harald Warmbrunn) and Mandfred (Karl Fred Miller) play chess and are constantly squabbling with each other. The three men have nothing but time on their hands to go fishing and drink at the local pub.

Then one day, Schultze's provincial life is turned around when he hears some Texas zydeco music on the radio. As an amateur accordionist, he has long been a member of a music club that gathers regularly to perform chorals and traditional polkas. Schultze can't get the lively tune out of his head and plays it again and again. It is something totally fresh and different. It even spurs this quiet fellow to cook up a spicy Cajun dish for his two buddies. Before long, Schultze is taking odd jobs so he can go to America and learn more about this music that has changed the color and texture of his life.

Writer and director Michael Schorr has deep respect for the strange ways in which our lives can be transformed and turned in a totally new direction. Things move very slowly in this quaint German town. Not much happens. Schultze's impulse to set off on a new quest is saluted by a zesty woman (Rosemarie Diebel) at a retirement home and by a barmaid (Welhelmine Horschig) who dreams of going to Spain to study flamenco. These two women, along with the wives of Jurgen and Manfred, encourage him in his new path. All this support gives Schultze the confidence to play zydeco music at the music club's 50th anniversary celebration. Even though the response is negative, the group still decides to send him to represent them at a folk festival in Texas. In America, Schultze realizes that his talent is meager in comparison to others in the competition. He heads off on his own personal quest in a journey into the South that is filled with surprises and an exhilarating sense of freedom and pleasure. Schorr's first film is a delight from start to finish.

The DVD features an audio commentary (in German with English subtitles) by Writer/Director Michael Schorr. 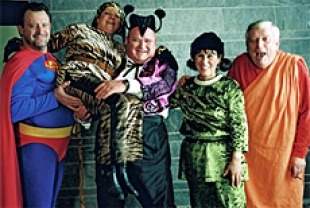