A discussion guide to the movie Two Brothers directed by Jean-Jacques Annaud. Recommended for people interested in finding spirituality at the movies.

Folk tales and teaching stories about animals prove that there are lessons in animal antics, morals in their social structures, and virtues evident in their behavior. That was certainly the case in Jean-Jacques Annaud's 1989 film The Bear, one of our all-time favorite movies. Now he returns to the genre he practically invented — using real animals acting as they would in the wild — to create a film about the importance of respecting animals for their beauty, intelligence, and mystery. It has the tone and feel of a children's fable replete with two adorable tiger cubs, a noble father, a courageous and caring mother, a famous hunter, a prince, some cruel men in a circus, a animal-loving boy, and his parents.

The questions and exercises in this Values & Visions Guide address some of the film's major themes including the nature of tigers, learning from wild animals, the emotions of animals, human domination of animals, mental poisons, the souls of animals, and caring and compassion for animals. The film runs 108 minutes and is rated PG. For our review and a plot synopsis, click here.

1. The Nature of Tigers

"The tiger is the lion of Asia, an enormous, staggeringly beautiful, powerful, and lethal animal — the Eastern king of beasts, at the very top of the food chain. Bold and graphic in appearance, startling in William Blake's memorable phrase 'fearful symmetry,' the tiger is so perfectly camouflaged in the dark and dappled jungle light that it can evoke apprehensive trembling over lurking, shadowed, sudden death. . . . At home in the jungles of India, the mountains of Tibet, or the taiga of Siberia, tigers require only water, shelter and an adequate supply of large prey. . . . Males do not involve themselves with raising cubs; the female, which is considered one of the most dangerous animals in the world when protecting her young, does that. Despite her zealous guardianship, however, only one out of three cubs will survive to maturity. . . . From a psychological point of view, the tiger usually represents dangerous, destructive, and deeply negative emotions, such as overwhelming rage and violence. Yet in myths and folktales, one often finds that a child can safely walk among tigers or lions or snakes. Symbolically this image suggests that neither intellect or power but rather innocence and spontaneity, can deal with such emotions." This description and analysis of the symbolic importance of tigers appears in Elizabeth Caspari's Animal Life in Nature, Myth and Dreams. 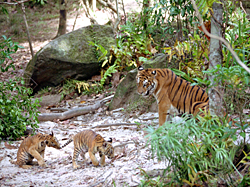 "I don't think I can learn from a wild animal how to live in particular — shall I suck warm blood, hold my tail high . . . but I might learn something of mindlessness, something of the purity of living in the physical senses and the dignity of living without bias or motive," nature writer Annie Dillard has observed. 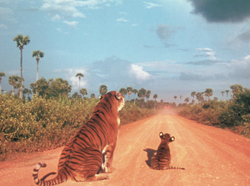 3. The Emotions of Animals

In Talking on the Water, edited by Jonathan White, Richard Nelson states: "Animals have a range of emotion and distinct personalities. They communicate among themselves and they understand human behavior and language. Animals are constantly aware of what people say and do and their presiding spirits are easily offended by disrespectful behavior." 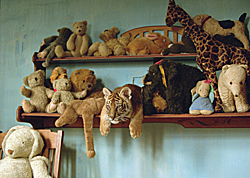 In The Ten Trusts, Jane Goodall writes about the human propensity to try and control animals: "Our domination of other animals is all but absolute. Not only can we kill them in the wild and destroy their homes, but we can also exert control over even the greatest of them. We know how to use pain to subdue and control. There are bulls, pigs, and camels with rings through their noses. There are cattle prods to send cruel stabs of pain through rebellious bodies. There are capture guns to anesthetize. There are whips and spurs to strike and goad. And, as a last resort, guns that kill."

In The Voice of the Infinite in the Small, Joanne Elizabeth Lauck writes: "J. Allen Boone believes that when we are taught to despise a creature, our feelings are a kind of mental poison that is somehow communicated to the creature, which then reacts against it." 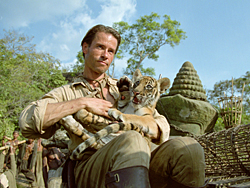 In The Boundless Circle, Michael W. Fox states: "The more we come to know the unique individual personalities of animals and look into their eyes, the mirror of their souls, the less doubt we will have that there is spiritual quality in all life. In 'The Unexpected Universe.' Loren Eiseley wrote: 'One does not meet oneself until one catches the reflection from an eye other than human.' "

7. Compassion and Caring for Animals

"We are beginning to learn that each animal has a life and a place and a role in this world. If we place compassion and care in the middle of all our dealings with the animal world and honor and respect their lives, our attitudes will change. All lives become sacred and we become more careful with our care of them," Marc Befoff writes in The Ten Trusts by Jane Goodall..

A Short Blessing for the Animals

May all my sacred
brothers and sisters
Walk,
Fly,
Swim, and
Move
in Love, Peace, and Freedom.
— from Peace to All Beings by Judy Carman 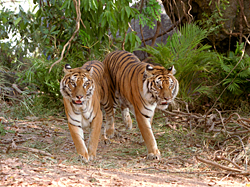