Observe the birthday of this Hindu saint by diving deep in the quest for the Divine.

Sri Ramakrishna (d. 1886) was born on this day in 1836. He was a great spiritual adventurer who advocated the harmony of all religions and was a forerunner of all those who believe in giving proper honor and devotion to the Divine Mother. Sri Ramakrishna was a temple priest yearning for a direct vision of God, a spiritual man who was consumed with the presence of the Divine, and a prophet of God-consciousness. He practiced the disciplines of different schools of Hinduism and then went on to an in-depth exploration of Christianity and Islam.

Here is a sampling from Sri Ramakrishna:

"Men are like pillow-cases. The color of one may be red, that of another blue, and that of a third black; but all contain the same cotton within. So it is with man; one is beautiful, another is black, a third holy, and a fourth wicked; but the Divine Being dwells in them all."

"Egotism is like a cloud which keeps God hidden from sight."

"In the kingdom of God, reason, intellect, and learning are of no avail. There the dumb speak, the blind see, and the deaf hear."

"As the village maidens in India carry four or five pots of water placed one over the other upon their heads, talking all the way with one another about their joys and sorrows, and yet do not allow a single drop of water to spill, so must the traveler in the path of virtue walk along his route. In whatever circumstances he may be placed, let him always take heed that his heart does not swerve from the true path."

"As the blacksmith keeps alive the fire of his furnace by blowing the bellows, so the mind should be kept clean and glowing with the help of pious company."

"As a mother, in nursing her sick children, gives rice and curry to one, sago and arrowroot to another, and bread and butter to a third, so the Lord has laid out for different men different paths suitable to
their natures."

"Dive deep, O mind, dive deep in the Ocean of God's Beauty: If you can plunge to the uttermost depths, There you can find the gem of Love."

Meditate upon one of Ramakrishna's metaphors.

Use one of Ramakrishna's phrases as a mantra. For example, "Dive deep" is a wonderful mantra to use whenever we are dazzled or bewildered by the manifold mysteries of life and of God. There is little to be discovered on the surface; we must plunge to the depths. 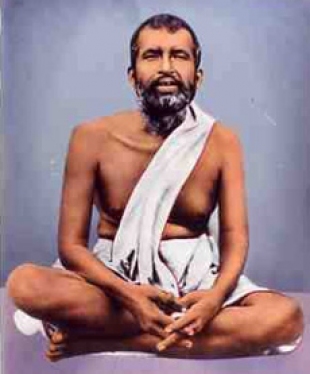