(PDP) Remembering the marine explorer and recommitting to the preservation of the seas to which he called us.

Jacques-Yves Cousteau — a French naval officer, oceanographer, conservationist, filmmaker, inventor, photographer, and author — was born on this day in 1910. His marine explorations on a minesweeper that he converted into a research vessel, the Calypso, drew people all over the world into his sense of wonder and the urgent need to protect Earth's waters.

Cousteau loved the feel of water from an early age but had intended to become a navy pilot. Then in 1933 a terrible car accident, which nearly took his life and in which both his arms were broken, altered this trajectory. He started swimming in the Mediterranean Sea for rehabilitation, and one of his friends gave him swimming goggles, starting his love of underwater adventures.

During World War II, Cousteau served as a gunnery officer and later as a spy for the French Resistance, for which he was awarded the Legion of Honor. During the war he met Emile Gagnan, a French engineer; together they co-developed the aqua-lung, enabling divers to breathe under water for extended periods. Cousteau also helped invent underwater cameras, a maneuverable diving saucer for seafloor exploration, and other useful equipment.

After Cousteau started expeditions on the Calypso in the 1950s, his books, documentary films, and the television series The Undersea World of Jacques Cousteau brought him to the attention of millions of people eager to learn from him about marine creatures and habitats. In 1973, he founded the Cousteau Society, a nonprofit environmental group which quickly grew to 300,000 members worldwide.

Cousteau became increasingly concerned about ecological sustainability and climate change. In The Human, the Orchid, and the Octopus, which he co-wrote with Susan Schiefelbein, he remembered: "In 1946 [we visited] a rock called Le Veyron, around which sea life swarmed … an undersea paradise. … About thirty years later I returned … to the same depth, to the same caves, at the same time of year. The grotto was empty. Not one single fish lived among the rocks. The verdant gardens were gone. … When I saw Le Veyron, I believed that the sea’s most monstrous force doesn’t live in Loch Ness. It lives in us."

But in that same book, he reminded us also of our power to heal and restore: "To enlarge the human perspective, to build on knowledge for future generations, to identify dangers, and to chart the course to a better world: If these are the goals of the explorer, then everyone — voyager, scientist and citizen, parent and child — is engaged in humanity’s momentous expedition."

Which of these quotes from Jacques Cousteau most moves you to act on behalf of preserving the treasures of the Earth? Carry that quote with you today as an inspiration.

"The sea, once it casts its spell, holds one in its net of wonder forever."
— in Life and Death in a Coral Sea

"Human blood is a testament to life’s origin in the ocean: its chemical composition is nearly identical to that of sea-water."
— in "Ocean Policy and Reasonable Utopias," The Forum (Summer 1981)

"Without ethics, everything happens as if we were all five billion passengers on a big machinery and nobody is driving the machinery. And it’s going faster and faster, but we don’t know where."
— from CNN interview (February 24, 1989)

"Truly, we do live on a 'water planet.' For us, water is that critical issue that we need. It’s the most precious substance on the planet, and it links us to pretty much every environmental issue, including climate change, that we’re facing."
— from an interview by Kathleen Walter, Newsmax (September 28, 2009)

In retrospect, far from bemoaning the car accident in which he nearly died, Cousteau saw it as a turning point in his life. In The Silent World, co-written with Frederic Dumas for the National Geographic Society, he observed that "sometimes we are lucky enough to know that our lives have been changed, to discard the old, embrace the new, and turn headlong down an immutable course."

Chart some occasions when your life has taken a sudden turn. Could you tell at the time where things were leading? How did you take advantage of hidden opportunities to move in a different direction? How might you use these same skills of transformation in your life at the moment?

You can also celebrate Cousteau's birthday with this music video, "Calypso," by John Denver: 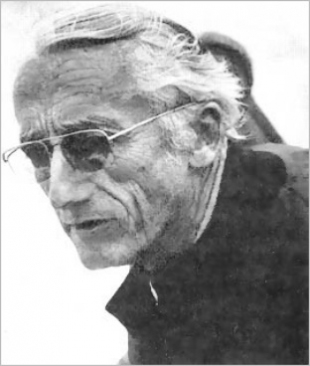