Honoring the transgender community while recognizing the high rates of violence they face.

Transgender Awareness Week, dedicated to honoring the lives of and obstacles faced by the transgender community, covers the seven days before November 20, Transgender Day of Remembrance (TDR). This day began in 1998 after the death of Rita Helser, a transwoman killed because of her identity. Originally intended as a vigil planned by Rita's friend Gwendolyn Ann Smith, TDR blossomed into an annual day to honor lives lost to violence against trans people.

Rates of violence against trans individuals are extremely high, with one out of every four people who identify as transgender having experienced some kind of bias-driven assault. Each year over two dozen transgender individuals are killed as a result of this violence, with black and Latinx transwomen facing the brunt of it.

During this week, organizers around the world hold vigils to raise awareness of this reality. The vigils are just the starting point for the work done by the LGBTQ+ community to reduce levels of violence and create a more welcoming society for trans people.To begin today, we invite you to reflect upon two quotes, explore book and film recommendations, and do the spiritual practices. 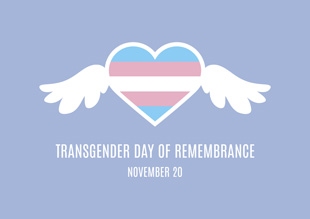