In Algonquin life, as in many cultures around the world, smudging is used to purify oneself, as if bathing in the smoke. Its calm energy washes away our confusion and self-hate. Purification is the first step in any ceremony or healing process. It slows you down and helps you enter the timeless world of spirit. . . .

In Micmac tradition, you smudge or "purify" the air ( or "vibrations" as the people today might say) by lighting a braid of kji-m-tsee-goo, "the Great Grass" (sweetgrass), a smudgestick, or a large shell containing ka-cho-see or "cedar branches" mixed with other healing plants. Sometimes it takes a steady application of fire before the smudge can stay lit by itself. Once lit, one shouldn't blow on the fire or the smoking end of the smudge stick, as this can only disturb the spirit of the fire. A flaming braid of sweetgrass can be put out simply by shaking the braid slowly, and the same slow shaking motion will keep the glowing ends kindled. Fanning the ember with a feather or feather fan is preferable.

Before smudging, the eyeglasses and watch are always removed. Jewelry is also removed, even if it is traditional. Everyone who will be smudged is asked to do the same. Even though it is a regular public and social activity, smudging is a solemn occasion, not to be laughed at or done in jest. Intent is important.

When the smudge is held before someone, they use at least one hand to brush the smoke towards them and into their hair. Hair is powerful to the Algonquin. It collects the vibrations of the energies around you, and is important to purify carefully. Hair also holds the smell of the smoke a long time. This is part of why native people don't cut their hair.

Traditionally, the smudge wand or triple braid of sweetgrass makes a circle around the person four times clockwise, one turn for each of the cardinal directions, creating a shield around them that wards off harmful energies. 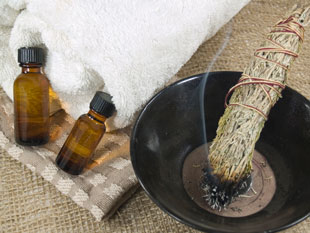