By Manuela Dunn Mascetti, Philip Dunn, R. A. Nicholson
An exquisitely designed volume that showcases the poems and teaching tales of Rumi.

There are so many different sides to the thirteenth-century Sufi mystic Jalalu'ddin Rumi that each new book about him or his poetry contains fresh material and abundant insights. This exquisitely designed volume is organized around the six books of the Mathnawi, one of the two enormous works of Rumi's poems and teaching tales. Many of these parables about animals depict the most rigorous dimensions of Islamic devotion. The translations by Philip Dunn, Manuela Dunn Mascetti, and R. A. Nicholson also include some of Rumi's poems.

In his foreword, Huston Smith notes: "It is not misleading to think of Sufis as impatient Muslims. Every upright Muslim expects to see God after death, but the Sufis want Allah now, moment by moment at the very center of their lives." In their introduction, the authors point out that: "Within the Sufi tradition the human being is considered the representative of God on earth. If we took this truth to heart and if for perhaps one day we would live as though everyone we love and relate to in our ordinary lives were the embodiment of the divine, then we would be completely transformed." The yearning for union with Allah and the ability to see the Divine in human beings is a subtle but strong motif in Rumi's prolific outpourings.

Perhaps the most commendable aspect of The Illustrated Rumi is the Islamic art that provides a luxuriant context for the parables and poems. These designs and plates reveal the truth of the statement from Muslim tradition: "God is beautiful and He loves beauty." 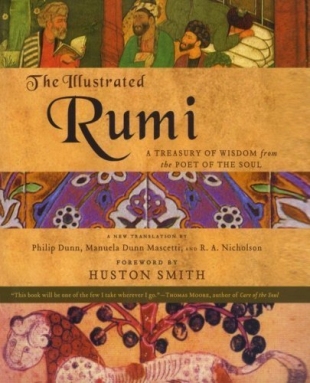