Circle of the Way

By Ken Arnold
A spiritual journey about illness, being present, and an epiphany that makes all the difference in the world.

A memoir recommended for those who have been diagnosed with a serious illness and want to take it on a spiritual journey to peace and solace.

Ken Arnold is an award-winning playwright and poet, whose poems have appeared in numerous magazines. As a Eugene O'Neill Fellow in 1979, he developed his play She Also Dances, which was cited in Best Plays of 1983. He is the author of On the Way and Nightfishing in Galilee. Arnold lives in Portland, Oregon, and is the publisher of a new series of books.

It is always a fascinating and edifying experience to read about the spiritual journey of individuals who are turned around in their tracks by a mystery, a teacher, or an epiphany of one sort or another. Ken Arnold was diagnosed with prostate cancer in 2004 and immediately understood on an intuitive level that it would be a chance to become less important. This is a key insight which stems from his Zen training. Arnold confesses that as an ordained Anglican minister who is now retired.

A major source of solace in his life is playing shakuhachi — the traditional bamboo flute. Another lifeline is his love of writing haiku and tank (five-line poems which convey emotion). A journey to Virginia and other places serves as means of savoring the different textures of his life and experience. In New York City, he observes:

Meanwhile, he undergoes radiation treatment and tries to find his way through the daily grind. A trip to Kyoto to play the bamboo flute lifts his spirits. His soul is refreshed by the gardens and the temples. He comes to a revived appreciation for the transitory nature of life and "the floating world" of Asai Royoi, who used the term to describe pleasures that are poignant but impermanent. The last chapter centers around Arnold's epiphanies in the Noguschi museum across the East River in Long Island City, Queens. He writes this about the massive stone sculptures:

"Bruised, I drag myself to the garden and search for the stone that wants to listen, or perhaps to speak. It is not about religious experience of ritual, nor the merely supernatural. I am not praying to the stone (although I think I could). But I see myself in them as surely as my face in a mirror: the shiny surface, the distressed façade, the cracks and the fissures, the odd coming together of personality and meaning, the willingness to let both go when I turn away."

The unburdened stones enable Arnold to reframe his cancer and to accept it as a chronic condition. It is a sort of peace that makes his spiritual journey a free fall into equanimity where at last he is, in his own words, "Not waiting to die, not waiting to be saved." 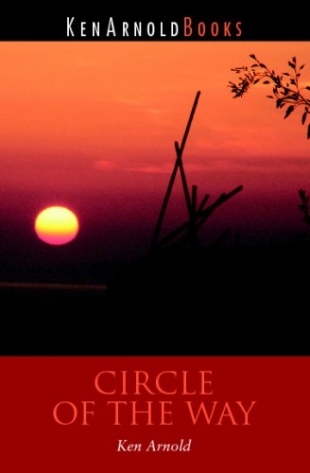