By Ravi Shankar
A watershed collection of sitar music by the pioneer who introduced Indian music to the West.

On the morning after Ravi Shankar's death (1920-2012), The Recording Academy announced that he was being given a Lifetime Achievement Award. Neil Portnow, The President and CEO of the organization said:

"Three-time Grammy winner and renowned sitar player Ravi Shankar was a true pioneer in introducing Indian music to the West. We have lost an innovative and exceptional talent and a true ambassador of international music."

During the 1950s, this gifted Indian musician created an orchestra and began to meld Indian and Western instrumentation. He recorded albums with classical violinist Yehudi Menuhin. Then in 1956, World Pacific Records released "Three Ragas" which impressed jazz and pop musicians with its improvisational qualities, shifting polyrhythms, and the velocity of the instrumentation.

Rock star David Crosby who loved the sound of the sitar, began telling everyone in the Western music community that Shankar and John Coltrane were the two greatest musicians living. Shankar also had a large influence on George Harrison of the Beatles whose sitar ballads include "Tomorrow Never Knows," "Within You Without You," and "The Inner Light."

Shankar's popularity with the public skyrocketed when he opened the final day of the three-day 1967 Monterey International Pop Festival with a four-hour performance. During his 40-year career, he kept on collaborating with a variety of musicians, taking on causes (such as the Concert for Bangladesh), and even creating music for movies such as Gandhi.

With its elegant notes and descriptions of Shankar's eclectic music career, The Essential Ravi Shankar, a two-disc set, is a deeply spiritual experience demonstrating the global dimensions of his artistry. 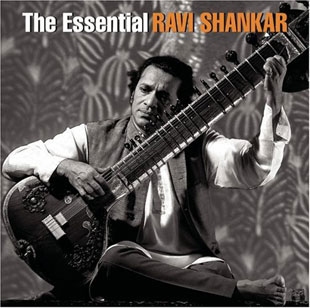