By Brandon Stanton
Beautiful photography book that challenges us to listen to the stories of others and open our hearts and minds to urban dwellers.

In 2010, Brandon Stanton came to New York City to pursue an artistic project: to take portraits of people on the streets. This ex-stock broker then began interviewing his subjects and adding their comments to the pictures. His incredible collection, shared through his blog, features more than 10,000 New Yorkers talking about their lives and values, hopes and dreams.

Stanton's first book of photos and stories, Humans of New York, was on The New York Times bestseller list for 45 weeks. He now reaches over 15 million people on several social media platforms. This book contains his choices of the best material from his blog over the past two and a half years and 100 stories that have never been seen before.

Looking at these photographs and reading the material connected to them, we were reminded of the ABC Television series "The Naked City" which ran from 1958 – 1963. Each episode closed with this line: "There are eight million stories in the naked city; this has been one of them." In those times as well as these times, it takes a spiritual perspective to want to learn more about the strangers that pass us on the streets or eat and shop in the same places as we do. Meister Eckhart had the right approach when he said: "Apprehend God in all things, for God is in all things."

Brandon Stanton carries on this panentheistic tradition, giving us a way to practice it on the streets of any city. His empathy and yearning to walk in the shoes of the young and old New Yorkers he encounters is something that we can both affirm and celebrate. 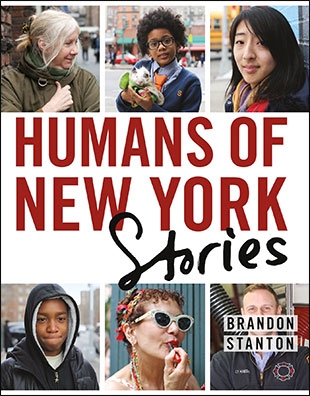