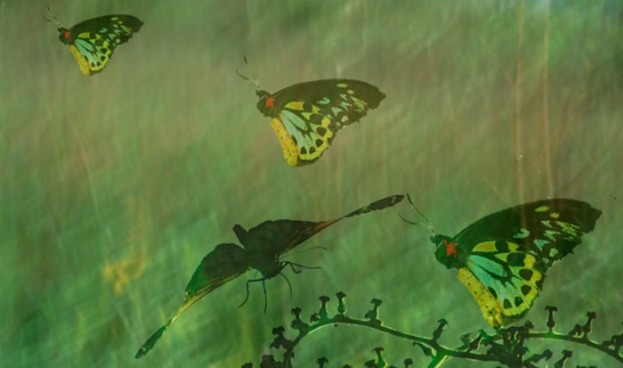 By Ella Lombard for KidSpirit's The God Issue.

And then there was — flight.

It wasn’t the usual sort of thing to actually experience, she mused, a flock of butterflies swaying upwards like an exhale, darting here and there before finally settling back on the branches of the bush. She stood in their midst and held her body still, her breath quiet, eyes soft. They flickered around her like bits of tiny tattered color in the intense blue of endless sky.

The first word that came to her mind was “miracle.” Because she believed in miracles, large and small, set out like presents wrapped in colorful paper. Just for her. A hint of summer on the wind. A glimpse of kindness in someone’s eyes. A moment in which she loved every single thing around her, because all of them together meant that she was gloriously, blissfully alive.

Alive! That was the second word. To be alive to glimpse the sky that reminded her of pale pottery cracked with wisps of cloud. Alive to have her hair lifted by the silver breath of wind. Alive alongside every single blade of grass that thrust itself upwards — and yes, every butterfly on the limber branches of the sun-flecked bush. All were alive with a power that stunned her.

And the last word, careful whispered quiet, maybe not meant to be heard by ears at all. She whispered it to the skinny stalks of grass and murmured it to the tiny beating wings that flooded the air around her. And response. In every flap of butterfly-wings she heard it, in every millimeter with which the grass grew in the clear blue air. In every breath of wind, every rustle of hair, clothing. In every footstep. Every split second with which the world turned. It was at this moment, thought the girl, that human language failed. Failed eternally. Because it could never actually, tangibly touch this grass and this bush and these butterflies and this endless … sky. Could never brush this source of soul and dream and the immense, shivering aliveness that sang flutelike through the delicate tremor of the air and the soft, solid ground.

Sometimes it was almost there. Silversweet on her tongue. She could taste the salt of the syllables, the soft, bittersweet clarity of the words. Only sometimes. Only long enough to blink, and think back again, search for it in the shimmer of memory. At such times she could feel it trickle away, flick itself into the air and take flight. Music. Soul. Magic. One beat of a butterfly wing.

Alone she stood in the grass, beside the bush, beneath the sky. The butterflies around her. The heartbeat of the earth. God.

In her moment of stillness, the world moved. Shifted. Breathed again.

When Ella wrote this article, she was a sophomore at Pioneer Valley Performing Arts Charter Public School in South Hadley, Massachusetts. When she isn’t studying or contemplating the mysteries of the universe, Ella enjoys reading, writing, and going on swashbuckling adventures.


Next Post: Welcome to KidSpirit Youth Voices on S&P