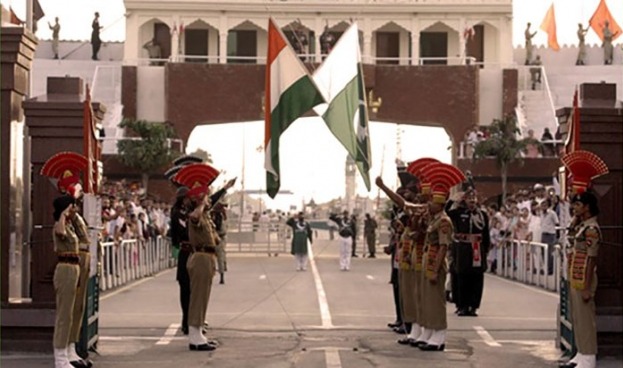 Posted by KidSpirit Online on November 9, 2016

By Ammara Mohsin for KidSpirit’s Discovery and Progress issue.

It was with much excitement over the prospect of being able to visit a different country, albeit from afar, that I visited the Indo-Pak Wagah Border in Lahore.

This is the boundary dividing India and Pakistan, with the eastern half of the Wagah village in India and the western half in Pakistan. I am from Pakistan, and as our car came to a screeching halt some miles away from the border gate, so did my anticipation. A whirlwind of emotions hit me. The first was disappointment, for India and Pakistan are as similar as a pair of monozygotic twins. Where was the “other country” I was promised?

Secondly, I felt profound confusion. I couldn’t fathom why the rivalry between these two countries existed when they are so similar. Then disappointment came swirling around again, this time coupled with anger about the loss that both of these nations in particular, and humanity in general, incur by twisting a potential friendship into such pronounced enmity.

The border looked as though a mirror had been placed in the middle of the gates. The scene was painted in green, red, orange, and white; the colors of both nations’ flags. The two flags stood together at the entrance gates, tall and proud. Border guards with stern expressions stood as erect as buildings. A huge crowd had gathered, and they watched in awe as the magnitude of the situation slowly dawned on them.

Patriotic songs of both countries were played and were accompanied by loud chants of Pakistan zindabad (“Long live Pakistan”) and Bharat mata ki jai ho (“Victory for Mother India”). Sitting on a balcony step, watching the synchronized parade of soldiers from each country, I couldn’t help but smile. I smiled because I saw there was nothing here to hate. These are just people like us sitting across an imaginary line. I smiled because there is so much that unites us.

This perceived wall does not only exist between India and Pakistan, it occurs within countries all across the globe. We have, for some reason, decided to attribute more importance to nationality, geography, or religion, instead of focusing on our similarities: our sense of self, values, and ethics.

There are many reasons to care about people across different countries’ borders, be it food, festivals, cultural heritage, even hospitality. We can have the best things that each country has to offer if we only embrace each other with open arms and warm hearts. All we need to do is ask ourselves: are the borders that divide us more important than the thousand reasons that unite us? After all, we are all human beings and are taught the same basic principles.

As I scrutinized the solemn expressions on the faces of the people present, I could see that many of them had undergone this epiphany. I couldn’t help but feel our overwhelming similarities, not just those of race, values, or culture, but our common humanity and shared capacity to love. Once this is understood, the borders blur and become mere dividers of geography, not affecting our sense of self, and certainly not dictating how we behave with our fellow human beings.

In this moment, I realized that there is hope. Not all has to be lost to hatred or the lust for power. We can progress, we can rise above the lines that separate. We can explore the capacity for love, sharing, and tolerance.

Ammara Mohsin is from Pakistan. She wrote this article when she was 17 years old. Writing has always held an appeal for her, particularly because it makes her feel that an ordinary person like herself can make an impact on the world and its people.