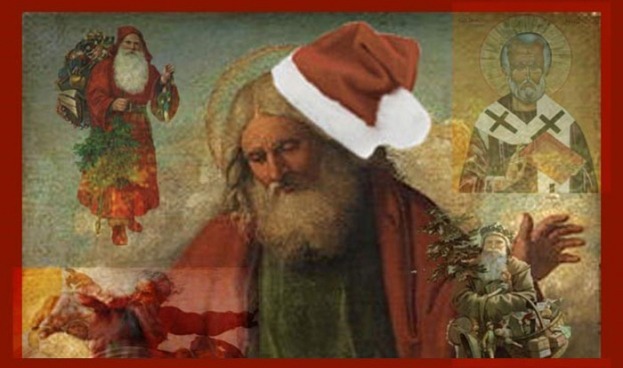 One Last Letter for You, Santa

Posted by KidSpirit Online on December 21, 2016

By Maria Christian for KidSpirit’s The Word issue.

Dear Santa,
Your identity was revealed to me in a book. The book was written for people three times my age, but I read it because it had the word Christmas on the cover and I loved Christmas more than anything. Believing in you until I was 11 is pretty good, I think — it’s better than most kids.

My family is not religious, though my parents are the children of Catholics. We had one plastic manger, which was kept in my room when I was 11, the last year of my childhood. That’s why I remember it so well. But I liked baby Jesus, anachronistically blond and pale, with a star above his crib. That was the beginning and the end of my family’s Christianity. You, Santa, were the real reason for celebration.

Santa Claus, did you know that I thought you were God for a long time? Did you know you were so important to me when I was lonely? You were proof that magic existed, and that some day fairies would come and take me home. I was a changeling, trapped in the dull, unimaginative land of humans, and you were my bridge back to the Fairy Realm. Since you have faded from my life I have feared that I would become as jaded and cold as the world around me. In the passing years, I have held onto my honesty and kindness like a dying man to life. Do you still have all my letters? Do you still have those scrawled notes signed, “I love you”?

Santa, those letters encompassed my heart and soul, my dearest desires. Nesting dolls, video games, kittens, and a toy from the Island of Misfit Toys. Every year I asked for something different, some odd, little thing I wanted more than anything in the world. They are a lost record of my mind. One thing never changed though: I asked for world peace at the end of each letter. I didn’t know what that meant, of course. Maybe just an end to war for a little bit, not that I knew what that meant either. It was a vague little prayer to the only God I knew that delivered, and maybe in some way it came true. What did I know of the world?

I help my little sister write letters now. She asks for the same things I asked you for, once. A coloring set, kittens, books, colorful presents under the tree. She believes in you, Santa, and I’ve started being you. But I am still a changeling child, waiting for the Fairy Realm to take me back. I am here, and it is Christmastime.

Santa Claus, do you know you are that little bit of God in all of us? That certain, peculiar, indescribable feeling? You are preserved in wax-marks, in the mysterious runes of children asking for puppies and kittens. You are preserved in the hope for world peace. You are saved inside the part of the brain that retains childhood memories, unfiltered and free of nostalgia. You are hope in its purest state. What prayer is more honest than a letter to you? No doctrine, no choir, no mythology — just quiet prayer and love.

So, without further fanfare, I present this one last letter for you, Santa.

This Christmas, I would like a 3DS with the new Animal Crossing video game. I would like some books for my collection. I would love new sketch pads and maybe a recipe book so I can teach myself to cook. Oh, and some surprises, of course. Plus world peace, because I will never grow too old to hope for that.
I love you, Santa. Have a very, very Merry Christmas! Good luck making all those presents, dear friend. My little sister’s counting on you.

When she wrote this piece, Maria Christian was 15 and in 10th grade. She has a passion for detectives and aliens, and refuses to believe that the two are mutually exclusive. The holidays are her favorite time of the year.