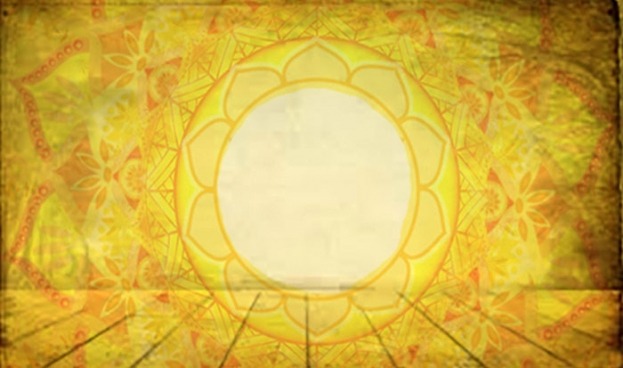 Yellow: The Feeling of Mindfulness

It’s Thursday, the best day of the week, no question. Thursday is the day my mindfulness group meets, which means that at 11:15 a.m. I get to leave my classes and escape the overwhelming social life of a 12-year-old. Instead, I spend 30 minutes with my amazing mindfulness teacher, Mrs. Parr, doing things that actually make my life better in so many ways.

Mrs. Parr opens calm.com, our favorite meditation website, and we do a five-minute mindfulness exercise by sitting quietly and paying quiet, nonjudgmental attention to different parts of our bodies. It only takes five seconds for me to feel absolutely calm and centered. Mindfulness is being in the present moment, on purpose, without judgment. By the time I open my eyes, five minutes have passed and I can’t even tell. That’s how great it is.

It usually takes me a few moments to come back out of my head when we finish, so I am still zoning out a little when Izabel, my friend for a grand total of most of my life, expresses something that I’ve never really thought too deeply about. She says that society demands perfection in different ways; some people think you have to look beautiful, and others say it’s what’s on the inside that counts. After our mindfulness group meeting ends, I go back to class in one of those deep thought comas that I have sometimes.

Later that afternoon, when I finally get home from school, I’m able to smooth out the tangled mess of an idea that formed in mindfulness group. Slowly it begins to take the form of colors.

Society makes you think you need to be so many things, even though you don’t. It’s a war. There’s one side of society that cares about your physical appearance: Look like this airbrushed supermodel! Then the other side says, “No-no-no, you just have to be a good person on the inside. Do your homework, follow orders, be kind.” Now, I’m not saying that you shouldn’t care about your appearance or be a good person, but both sides’ trying to beat the other puts a lot of pressure on each of us.

Imagine one side is red. Those on the red side are the part of society that demands physical perfection: beauty, athletic abilities, nice clothing. The red side wants you to care about how you look and how other people see you. Do you have the right shoes?

The blue side, on the other hand, demands mental perfection. The blue side wants you to care about things like grades and other numbers that are supposed to define you, even though they have little to do with who you really are. Society wants all of this and more from you, and so you try to achieve it, sometimes without even knowing it. The war that could have stayed external finds its way inside of you and rages on internally.

There is no way to stop the fighting between the red and the blue on the outside. But there is a way to protect yourself on the inside.

You are a single person in this war. There are thousands on either side, but you are one. When you did not know about this war, you were innocent and did not pick sides. Imagine you are neither blue nor red, but yellow. Imagine you are a young child, about two, sitting on the ground and sucking your thumb. You could not care less what people see when they look at you or whether or not you can count to 100. You are in the yellow zone.

Once you are older you will continually switch sides between red and blue and their competing demands. You may still have yellow in you, but it’s not the only color. Whichever side you are on — “appearance is important” or “do everything perfectly” — will seem like the right side, but once you switch the balance will tip. You will always feel like you’re on the winning team, but that isn’t always good. War is bad, whether you are winning or losing. It’s definitely exhausting for one thing. You are constantly having to choose which party you belong to. The fight will cloud your mind, and it will be the only thing that you think of, ever. There is, however, a way to return to yellow — to mindfulness.

Have you ever heard of the eye of a hurricane? That’s what mindfulness feels like. It’s a yellow bubble that’s kind of similar to a force field. You can go wherever you want and you won’t get touched by the war. And they — the blue and red forces — will get out of your way.

When you are yellow again, when you can see the war for what it truly is, you can stand taller and stronger and you can see things that those immersed in the war cannot. You might see a little bluebird where others would only see something that’s prettier than they are. You will see trampled grass and feel sad that so much is dead, where before you might not have even seen that there was grass there at all. If you can create this bubble — just by practicing mindfulness, the best and easiest practice that you can ever try — then your life will be more peaceful and beautiful. I know this because I came from the war and now I am observing it from the outside.

I come back to reality with a jolt. I am sitting on the floor of my bedroom and the first thought that hit me is: Why yellow? My answer comes sooner than I thought it would. Happiness is yellow. Mindfulness brings a greater, truer, happiness than anything else can. So, yellow. Yellow can also change to another color if you add red or blue. I didn’t even think of that originally, but . . . whoa. We start yellow as very young children, and we usually change our colors. I don’t know about you, but I would rather be yellow.

Being in the calm yellow zone can become a habit. When you are introduced to mindfulness, you get a taste of not being on a side that demands perfection. The first time I tried it, I opened my eyes and was astonished, so I kept seeking it out. I had to practice a few more times before I was able to enter the yellow as if it was second nature.

Yellow became my default. I never went back to the war. Now I am trying to spread the word. You, too, can leave the war zone and see the grassy hills and the bluebird.

When she wrote this piece, Olivia Bailey was 13 and heading into eighth grade at Frank Harrison Middle School in Yarmouth, Maine. Her hobbies include reading every fantasy novel she can get her hands on, writing about Odorea (a world she created with her friends), drawing constantly, skiing at Saddleback Mountain Ski Area, and playing with her dog, Piper, who enjoys chewing up things bigger than she is. Olivia is working hard to get her whole school to participate in mindfulness exercises and has nearly succeeded.


Next Post: The Role of Women in the Bahá’í Faith