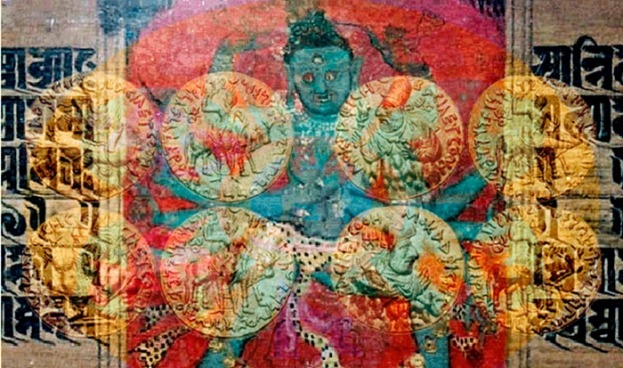 Two Traditions: A Multitude of Symbols

By Sanya Kochhar in the KidSpirit Numbers & Symbols issue.

India is a composite culture, an amalgam of heirlooms left by the various civilizations, empires, and religions born here.

Aside from the rich cultural heritage, there are priceless pearls of wisdom that continue to be passed down through the generations, even today. These heirlooms have grown to be an important part of our lives.

The diversity of my country’s populous has exposed me to religions such as Islam, Christianity, and Jainism. Over the years, my interactions with friends following different religions has made me question the superstitions I have grown up accepting. Though India is a secular country, each religion has given us superstitions and traditions that impact every aspect of our lives — marriages, gifts, and names.

Maternally, I’m a Hindu; paternally, a Sikh. All my life, both of my parents have eagerly conferred their traditions on me: a pragmatic, semi-agnostic teenager. While I initially accepted these traditions, the idea of blind faith began to trouble me over the years, pushing me to find out more about their histories. I began to collect nuggets of information from the elders in my family and the internet so I could understand more about the rich culture of my country.

One Hindu superstition is the concept of ‘shagun’. Shagun is the addition of one rupee to any monetary gift — be it a hundred rupees or a thousand. This was born from the tradition of gifting only one rupee in ancient marriages, a custom followed so that there would be no disparity between the rich and the poor. Over time, people began to add whatever sum they wished to the one rupee. Although today it may seem insignificant, the shiny rupee coin is added as a symbol of generosity and abundance, to show that we are willing to go beyond our means. As well, giving an even number is considered inauspicious.

Some Hindu beliefs revolve around numerology. I have friends who have added and removed letters from their names because a priest said that one more or less was unlucky. It is also said that important tasks should not be carried out by four people because traditionally, this is how many usually carry a corpse to the funeral pyre. It is also believed that bad luck comes in threes. ‘Teen tigada kaam bigada’ literally means that working in a trio ruins the work. Be it while traveling or handing out sweets, we try to avoid the number three.

Hinduism is abounding in superstitions, some with background stories based on the historical texts, others of more ambiguous origins. Sikhism, on the other hand, has relatively simpler beliefs. I learned from my grandmother that Sikhs don’t support superstition all that much. They have five simple rules regarding what a Sikh must carry at all times, but besides that, their superstitions are few.

Sikhism strictly advocates the belief in one God or ‘Ik Onkar’. While Hinduism, being a polytheistic religion, is replete with myriad superstitions, each stemming from a different God. For example, during wedding ceremonies, the bride and groom take seven revolutions or ‘saat pheras’ around the holy fire, joined together by a piece of cloth. The seven rounds symbolize the seven vows they have taken together, praying for a lifetime of wealth and prosperity. At the age of five, the first time I saw the ritual, I was fascinated. My grandmother explained that after seven lives together, the couple would finally find peace. Sikh marriage rites are not too different, with their four revolutions or ‘laava phere’ around the holy book, from which, four hymns are sung.

Aside from numbers, India has multitudes of monuments, temples, and pillars inscribed or embossed with symbols, each with its own purpose. Of these, one of the most prominent is the swastika or, as most visitors would know it, the symbol tilted and appropriated by the Nazis. Where half the world associates it with murder, massacre, and manslaughter, in India, it is considered auspicious, sacred, and sacrosanct. Swastika, the legacy left to us by the Indus Valley Civilization, literally means ‘it is auspicious’. Having grown up seeing the swastika at the entrance to my grandparents’ house on festivals as an invitation to Lakshmi, the Hindu goddess of wealth and fortune, I automatically associate it with spirituality and superstition. It is incredible how the same symbol can have two completely contradictory associations in different parts of the world.

Possibly the most universally recognized religious symbol is ‘Om’, known as the yogic or meditation chant. Some may know it from Adam Levine’s tattoo or as the lyric of a Beatles song, but in India it has a deeper, more spiritual meaning derived from Hinduism, Jainism, and Buddhism. I have seen Om in every single Hindu temple, and have chanted it before and after every prayer as an invocation to God. Om has come to symbolize more than just religion - it is used world over to build inner peace and reach out to one’s consciousness.

Even for those who do not see a deeper meaning, myself included, the symbol has a calming effect. Taking a minute to chant Om three times, listening to myself breathe, often snaps me out of stress before an exam.

Another emblem I have grown up seeing is the Sikh ‘khanda’ — a double-edged sword with a round circlet in the center flanked by two identical interlocked swords. Khanda has many interpretations, but in my family it is said to signify strength, freedom, and truth’s ability to cut through illusion. It is used to stir the nectar given to Sikhs in their baptism ceremony. The round circlet represents eternity and unity of God. As circles have no beginning or end, the meaning is of timelessness, and therefore, eternity. The twin interlocked swords, piri’ and ‘miri’, signify the coexistence of spirituality and secularity. Each of these objects once belonged to a Sikh guru (spiritual leader). The same symbol that means nothing to me, compels my father to join his hands in respect whenever he sees, even a sticker on a passing car.

Another important Sikh symbol is the ‘Ik Onkar’ sign. It comprises two letters in Punjabi, the first is the number one and the second is ‘urha’ which means God. Ik Onkar is the concept of unity of God, which is one of the core beliefs of Sikhism. These words are the first two recited in the morning prayer that I have grown up hearing in school, one that I can recite without thinking or fully understanding. Yet somehow, I find myself associating these words with inner peace and reflection.

Being semi-agnostic, these practices and beliefs sometimes seem impractical to me. Although I follow them too, I could not identify with them until I learned more and understood their roots. The idea of blind faith based on family tradition make no sense to me without knowing the significance of such things. I feel like such small acts do not truly define one’s devotion to God or religion. Why add a silent letter to your name, reschedule your entire five-day wedding, or even call it off because the priest said the numbers and the stars do not align? What becomes of the families who cannot afford the fourteen diyas or bring their life to a standstill for the thirteen-day mourning period after the death of an extended relative? Are they any less devoted because they lack the means?

Although I may not actively support a lot of these beliefs, I do find that they some taught me important lessons. The tradition of adding a coin to a gift taught me about generosity; the seven rounds of the holy fire taught me about the commitments carried in our words; chanting Om three times when my mind is in a downward spiral of stress not only calms me down but also gives me strength.

Belief systems give some direction, others a sense of security. For many, including my parents, these traditions are symbols of continuity. For me, beliefs may govern small things like the lucky pen I carry for an exam. For others, they can be the basis of their entire lives. This is not the case just in India — each religion has their own version of beliefs disguised in individual dress, but fundamentally the same. For Hindus, there is Saat Pheras. Muslims have three vows of acceptance of the marital responsibilities, and Christians have ‘Till Death Do Us Part’. Where Sikhism considers the number thirteen as lucky, Christians sees it as unlucky and Hindus associate it with death.

Regardless of religion, region, or generation, ultimately what matters is what each individual believes. My mother will always light fourteen lamps and my father will always add that one extra rupee to my birthday gift. For me, it makes no difference if I take one wedding vow, four, or even thirteen. Superstitions are entirely subjective. Like beauty, faith is in the eye of the beholder.

When she wrote this piece, Sanya Kochhar was 16 years old. She is from India and loves dancing and playing guitar, especially hard rock.