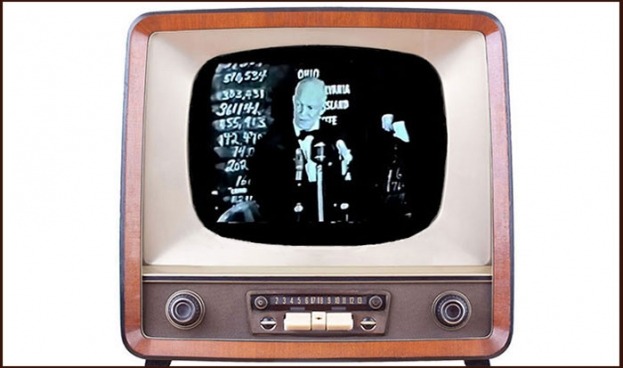 This post has been contributed by Judith L. Favor, who is rooted and grounded in Quaker tradition and contemplative practice. She is retired from pastoral UCC ministry in San Francisco and teaching at the Claremont School of Theology. She created the "As It Is: Spiritual Journaling" e-course for S&P.

This year I've found myself reflecting in my journal about the meaning of democracy to me. I have turned to some traditional Quaker queries and crafted some of my own as I have explored my feelings about and experiences with my country and its leadership. One query that I suggested in my last blog post is: Which persons or events helped to shape your democratic values? How? It led me to both memories and reflections about what I call "Big-Hearted Democracy."

Big-Hearted Democracy became real for me on the day We, The People elected Dwight D. Eisenhower as 34th President of the United States. On November 4, 1952 — through the miracle of television — democracy became visible and audible to me for the first time. My school principal placed a small, boxy television at the edge of the stage in the auditorium. It was the size of a Shredded Wheat box and had a tiny twelve-inch screen. Each class had thirty minutes to crowd in and watch. We, the sixth graders of Richmond Elementary in Portland, Oregon, got to see Democracy at work across the nation, in living black and white. Rowdy boys stopped their fart contests and spitball wars to stare at crowds cheering for political candidates in the streets of the United States. Gawky girls stopped whispering secrets to each other and fussing with their hair to watch voters emerging from polling places with big grins and expansive gestures.

At home, Big-Hearted Democracy played triumphantly on a brand-new television console, purchased by parents who usually had to work on Tuesdays. Mom was a file clerk and Dad was a milkman, but their bosses gave them paid time off on Election Day. (In the Fifties, Oregon employers supported workers’ voting rights.) After casting ballots, my folks celebrated by buying a TV set, and installing it while we were at school. The new television was a total surprise to my brothers and me. We were so proud to be the first on the block to own a TV that we quickly spread the news to our neighbors. Chinese, Cuban and Irish families on our dead-end street arrived bearing snacks, and we invited everyone in to watch the returns.

In my 12-year-old memory, Big-Hearted Democracy became permanently imprinted with Attention, Connection, Enthusiasm, Hospitality and Zeal on Election Day 1952, sixty-plus years before I met the authors of Spiritual Literacy!

In college, I was startled to learn The Constitution of the United States — as originally written and ratified — does not grant American citizens the right to vote! Individual state laws determine voter eligibility. Did Mr. Hill, my sixth-grade teacher, emphasize this fact? If so, it didn’t stick. I am uneasy knowing that for more than 100 years (!) there was no federal ruling to eliminate race or gender voting barriers in the United States of America. Systemic disenfranchisements were later eased by passage of the Fifteenth Amendment (in 1870) and the Nineteenth Amendment (in 1920.)

I recorded these Practicing Democracy memories and reflections on August 6, 2020, the centennial of the passage of the constitutional amendment ensuring women's right to vote. In California, however, women won the vote in 1911, (four years before my parents were born) and nine years before American women gained universal suffrage. California efforts began in 1908 (the year my Dad’s parents were married), when bold determined women in San Francisco linked arms for what is believed to be the first equal-vote demonstration in America.