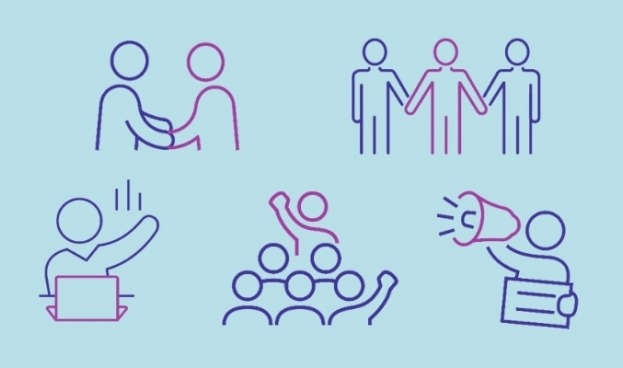 What Kind of Activist Are You?

Last summer when Black Lives Matter marches were taking place all over the country, the residents of our retirement community were upset. Most of them had been marching for good causes all their lives, but we were in lock-down due to the pandemic and discouraged from mingling in crowds. So they made a big banner to be carried in the march by two younger masked local clergy; residents signed their names on it in lieu of being there themselves.

Of course, there have always been reasons why some of us can't participate in a big demonstration: disabilities, lack of energy due to age or illness, concern about counter-demonstrations and the police, etc. Now the pandemic has further limited engagement.

That's why I'm glad there is more than one way to be an activist, to express our positions and advocate for social justice. Maggie Kuhn, founder of the Grey Panthers, identified five kinds of activists:

1. mentors, who teach the young;
2. mediators, who resolve civil, racial, and intergenerational conflict;
3. monitors, who serve as public watchdogs on city hall and Congress;
4. mobilizers, who advocate and organize for social change;
5. motivators, who encourage people away from self-interest toward the public good

At a Sage-ing International Conference some years ago, the leaders of an elder activism workshop explained these roles and asked the participants to gather in groups under the "m" that matched what they could do.

At first, I thought I should go with the "monitors" because at Spirituality & Practice we review so many books and cite so many articles by spiritual teachers and writers who are keeping track of what public officials are doing. But I eventually joined the "motivators" because I think by encouraging people to do spiritual practices, I am steering them away from the desires of their small selves to the benefit of the public good.

What kind of activist are you? Which role fits the kinds of things you have done in the past? that you are able to do now? that you would like to do in the future?