A Prayer Giving Thanks for the Pioneers of Multifaith Practice

Posted by Frederic and Mary Ann Brussat on April 15, 2013

We are reading more and more articles about people creating their own religions by taking what they find of value from different wisdom traditions. It has been reported that almost half of all Americans under 30 believe that the best religion is one that borrows from different religions. Many spiritual teachers, deeply rooted in their own tradition, have crossed borders and paved the way to this auspicious moment of openness, hospitality, and genuine respect for all. We are grateful to these pioneers of the multifaith movement. 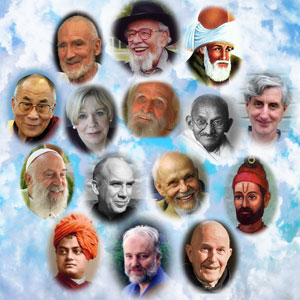 Let us now praise
those pioneers of faith
who have crossed borders
and opened the doors
to all the world's religions.

They have encouraged us
to reap the riches of so many
wisdom traditions.

We give thanks for Rumi,
the Sufi saint and seer,
who calls us to join
the mystical caravan
where universal love
replaces dogma;

We are grateful for Kabir,
an Indian poet whose
hospitality enabled him to
model an openness to
many spiritual paths;

We give thanks for Mahatma Gandhi,
a Hindu who advocated nonviolence
and respect for all people, no matter
what their religion;

We are grateful for Bede Griffiths,
a Englishman and Christian who
lived in India where he built
bridges between contemplatives
from the East and West.

We give thanks for Thomas Merton,
a Trappist monk who studied
and savored the fragrances
of all the world's religions;

We are grateful for Swami Vivekananda
for his ideals of a universal religion
and his introduction of yoga in the West;

We give thanks for Lex Hixon,
a visionary advocate of non-exclusiveness
and multifaith practice;

We are grateful for Wayne Teasdale's
extraordinary contributions to launching
the interspirituality movement;

We give thanks to His Holiness
the Dalai Lama who has demonstrated
an adventuresome curiosity about
other faith perspectives;

We are grateful to Thomas Keating
for his unstinting promotion of and
participation in interreligious dialogue;

We give thanks to Br. David Steindl-Rast
for his groundwork over the years
on Christian-Buddhist dialogue;

We are grateful to Rebbe Zalman
Schachter-Shalomi for scouting out
the territory of interspirituality;

We give thanks to David Cooper,
a Jewish mystic for his keen
overview of the world's religions;

We are grateful to Karen Armstrong
for her profound writings on the
role of religions in the modern world
and the shared value of compassion;

We give thanks to Huston Smith
for his insights into all the religions
and his exciting example of being
a multifaith practitioner.