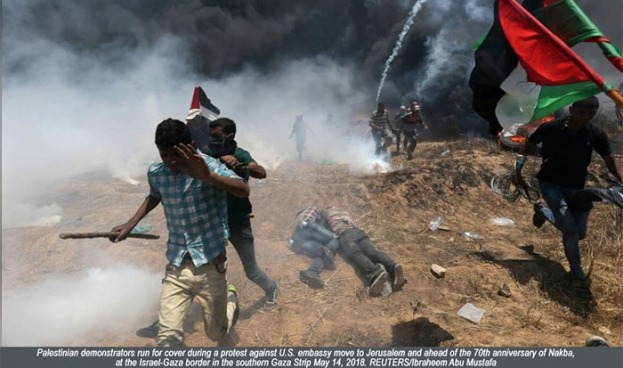 A Prayer for the World's Conscience

Posted by Patricia Campbell Carlson on May 16, 2018

May 15, 2018 was the 70th anniversary of Yawm an-Nakba, which translates from Arabic as "Day of the Catastrophe." It commemorates the displacement of 700,000 Palestinians from their homeland when the state of Israel was established during the 1948 Palestine war.

Seventy years later, Yawm an-Nakba has taken on new sorrow and significance after violence at the border fence between Gaza and Israel on Monday left 60 Palestinian protesters dead and doctors struggling to keep up with the tide of Palestinians suffering gunshot wounds. Tensions had been building for many days leading up to the official relocation of the U.S. embassy from Tel Aviv to Jerusalem, which had a celebratory air in ghastly contrast with deadly events along the border.

Although the U.S. staunchly defended the actions of Israeli troops, international condemnation was strong and swift. UN Secretary-General António Guterres was "profoundly alarmed" by the killings. The International non-profit organization Doctors without Borders stated that the violence was "unacceptable and inhuman," and that "it is unbearable to witness such a massive number of unarmed people being shot in such a short time." Queen Rania of Jordan, a close U.S. ally, tweeted that it was "a dark and sad day in history, marked with more Palestinian sacrifices. When will the world's conscience mobilize to give Palestinians the rights so many of us take for granted? May God have mercy on those who lost their lives defending Jerusalem's proud Arab identity."

Most Compassionate One,
You give each person dignity and teach us to treat all life as sacred.
How then can we continue to kill each other over disputed claims?
You have built into us a longing for home, for our own land.
It is a genuine need, but we cannot seem to see beyond it to the needs of our brothers and sisters.
In country after country, over ages and ages these territorial fights have gone on, and still we cannot apply the toll of devastation as a deterrent to the next conflict.
We still seem to think that killing others is a reasonable way to protect what we see as our own.
And here we are, humbling asking for Your help again,
when you have already told us all we need to know about mercy and reconciliation,
and when, in Your kindness, You keep bringing us even more insightful teachings.
Forgive us for ignoring Your steady and merciful messages.

It is right that our hearts break with sorrow as we learn more about the suffering and overwhelming grief of those now burying their dead and tending the wounded.
It is right because they are our brothers and sisters and their pain is our own.
It is right because we need to be reminded again that this is not the way to what we truly want.
It is right because once again each of us has to ask, "What can I do, now, to bring healing and create sane responses to conflict?"
We are genuinely grateful for all efforts in that direction — there are many! — and we vow to do what we can to follow Your call for compassion, understanding, and peace-making.
Amen.


Next Post: A Prayer for the Prospering of the Poor People's Campaign