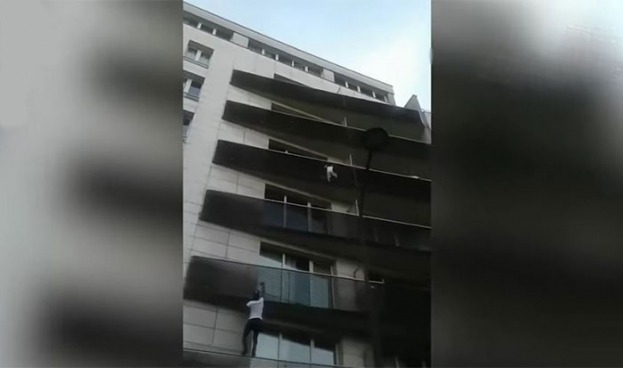 A Prayer in Awe of Mamoudou Gassama's Spontaneous Courage

Posted by Patricia Campbell Carlson on May 29, 2018

What we do in emergency situations speaks volumes about who we are, as 22-year-old Mamoudou Gassama's courage and quick reflexes show. Upon seeing a child dangling from a fifth-storey Paris apartment balcony last Saturday (May 26, 2018), he scaled the building Spiderman-style and deftly hoisted the four-year-old to safety. Gassama's strength and flexibility alone were astonishing, but it is his complete lack of hesitation to come to the child's aid that earned him a meeting with French President Emmanuel Macron. President Macron offered Gassama a gold medal for "courage and devotion," French citizenship, and a job as a firefighter.

“I ran. I crossed the street to save him,” Gassama, from Mali, told Macron. “When I started to climb, it gave me courage to keep climbing.” He says God helped him, and adds “Thank God I saved him.”

Pure awe makes us want to watch
Mamoudou Gassama's heroic rescue over and over.
How thirsty we are for models of spontaneous courage —
spontaneous in that it arises in the moment,
yet we know that many thousands of other acts of fortitude
built Mamoudou Gassama's character so that he could respond
as strongly and nimbly as he did.
May we always be looking for ways to build our own character
so that we have the needed resources
when a moment of challenge comes.
We give thanks that this rescue helped ensure
Gassama's future in France, and we pray to remain mindful
of the plight of other migrants in a world
where nearly two-and-a-half million people are displaced
from the country of their birth.